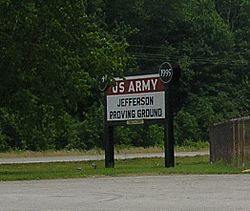 The Jefferson Proving Ground (or JPG), located near Madison, Indiana, was principally a munitions testing facility of Test and Evaluation Command of the United States Army Materiel Development and Readiness Command. JPG also serves other Department of Defense organizations as well as private contractors assigned.

On October 8, 1940, the Chief of Ordnance acknowledged a need for the construction of an additional proving ground to carry out simultaneously and without interruption the many activities relative to proof work of the ordnance manufacturing program. In December 1940, the site acquisition committee decided on a 56,000 acre (230 km²) tract of land in southern Indiana because of its proximity to surrounding industrial and land availability. Construction began immediately, and the first round was fired at U.S. Army JPG on May 10, 1941. In April 1953, JPG reached a pinnacle of employment and activity, with 1,774 employees and a production of 175,000 rounds fired monthly.

Base Closure and Current Use

In 1989, JPG was identified for base closure under the base realignment and closure (BRAC) and closed on September 30, 1995. Since that time, the Army has maintained a small on-site oversight staff and an off-site environmental coordinator. JPG is currently administered by the BRAC Division within the Army's Installation Management Agency which is responsible for managing JPG’s closure, cleanup, and property transfer.

Approximately 50,000 acres (200 km²) of the grounds north of the historic firing line became Big Oaks National Wildlife Refuge in 2000. In 1998, a 1,033 acre (4 km²) parcel north of the firing line within the former range is operated as an air to surface gunnery/bombing range by the Indiana Air National Guard. Jefferson Range is currently in use for UAV training, including tests of air-to-ground strikes.

The base contains a substantial amount of depleted uranium and the NRC has posed questions to the Army regarding environmental concerns as a result.

All content from Kiddle encyclopedia articles (including the article images and facts) can be freely used under Attribution-ShareAlike license, unless stated otherwise. Cite this article:
Jefferson Proving Ground Facts for Kids. Kiddle Encyclopedia.