The series follows Jessie Prescott, a young woman from a small town in Texas. She has big dreams. She moves to New York City to be an actress. She becomes a nanny for the Ross kids: Emma, Luke, Ravi and Zuri. They live in a multi-million dollar penthouse on the Upper West Side. With Bertram the butler, Tony the doorman, and the Ross kids, she has a lot of adventures.

The show went straight to series. There was no pilot. The show is taped at Hollywood Centre Studios in Los Angeles. Season 4 began production in the summer of 2014 and ended in March 2015. 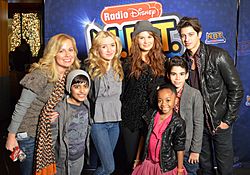 All content from Kiddle encyclopedia articles (including the article images and facts) can be freely used under Attribution-ShareAlike license, unless stated otherwise. Cite this article:
Jessie (TV series) Facts for Kids. Kiddle Encyclopedia.