Joan Van Ark (born June 16, 1943) is an American actress, known for her role as Valene Ewing on the primetime soap opera Knots Landing. A life member of The Actors Studio, she made her Broadway debut in 1966 in Barefoot in the Park. In 1971, she received a Theatre World Award and was nominated for the Tony Award for Best Featured Actress in a Play for the revival of The School for Wives.

Van Ark landed her most famous role of Valene Ewing in 1978, first on the CBS series Dallas, then for 13 seasons on its spin-off Knots Landing (1979–92). For this role, she won the Soap Opera Digest Award for Best Actress in 1986 and 1989. She left the show in 1992, although she did return for the final episode of the series in 1993 and for the 1997 miniseries Knots Landing: Back to the Cul-de-Sac.

In 1985, she received a Daytime Emmy Award nomination as host of the Tournament of Roses Parade on CBS. From 2004-2005, she starred in the soap opera The Young and the Restless. She reprised her role of Valene in an episode of the new Dallas series in 2013. 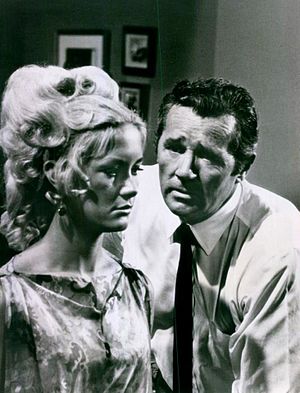 Van Ark was born in New York City. Both parents were also writers. She grew-up in Boulder, Colorado, with three siblings: Carol, Mark and Dexter.

At age 15, as a student reporter, Van Ark met and interviewed actress Julie Harris, who later recommended Van Ark apply to the Yale School of Drama. Harris had been the youngest student to attend the school on scholarship. Van Ark was one of the few students to attend the graduate program without first having earned an undergraduate degree.

She attended for only one year. Years later, Harris appeared on Knots Landing as Lilimae Clements, the mother of Valene Ewing, Van Ark's character.

All content from Kiddle encyclopedia articles (including the article images and facts) can be freely used under Attribution-ShareAlike license, unless stated otherwise. Cite this article:
Joan Van Ark Facts for Kids. Kiddle Encyclopedia.