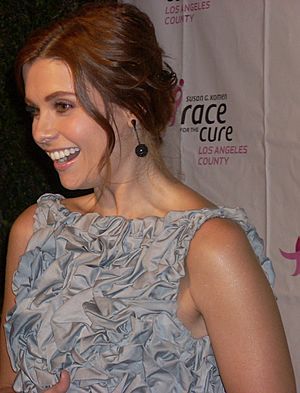 García was born in Tampa, Florida, to Cuban parents. Her mother, Loraine, was a homemaker and former elementary school teacher, and her father, Jay García, was a gynecologist. She has one brother, Michael García. She first started performing at age 10 when she auditioned for a local theater production and landed the lead.

She was discovered by Disney Channel, but her parents put school first and she continued to feed her passion by acting in local plays. She was the homecoming queen at Florida's Tampa Catholic High School.

She then briefly attended college at Florida State University where she was a member of the Delta Delta Delta sorority, but later quit school to pursue acting full-time, moving to Los Angeles, California. 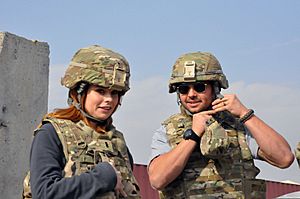 Garcia and her husband Nick Swisher, at Forward Operating Base Shank, Afghanistan on a USO tour 2011

In August 2009, People magazine reported that García was dating baseball player Nick Swisher. They became engaged in May 2010, and married on December 11, 2010 at the Breakers Hotel & Resort in Palm Beach, Florida. Bridesmaids for García included friends and fellow actresses Jamie-Lynn Sigler, Melissa Peterman, and Reba McEntire. Since her marriage, she has been credited as Joanna García Swisher. They have two daughters: Emerson Jay (born May 21, 2013). and Sailor Stevie (born June 28, 2016). 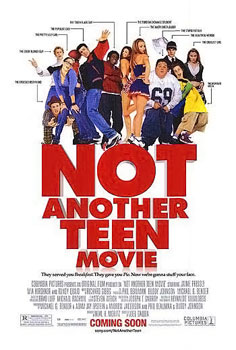 Not Another Teen Movie film poster

All content from Kiddle encyclopedia articles (including the article images and facts) can be freely used under Attribution-ShareAlike license, unless stated otherwise. Cite this article:
Joanna García Facts for Kids. Kiddle Encyclopedia.