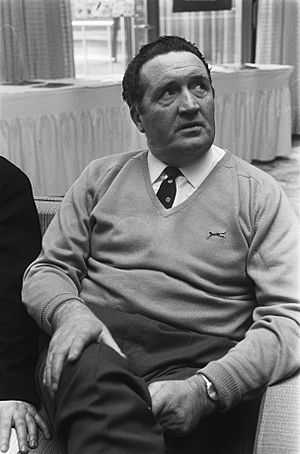 John "Jock" Stein CBE (5 October 1922 – 10 September 1985) was a Scottish football player and manager. He is best known for his highly successful management of Celtic. He became the first manager of a British side to win the European Cup, with Celtic in 1967. He also won ten league titles, eight Scottish Cups and six Scottish League Cups with Celtic. He also managed Leeds United, Dunfermline Athletic to a Scottish Cup and the Scotland national side to a Rous Cup. As a player, he played for Albion Rovers, Llanelli Town and Celtic.

Stein was born in Burnbank, South Lanarkshire. He was married to Jeanie McAuley. The couple had two children.

On 10 September 1985, Stein was managing Scotland against the Welsh national team in a FIFA World Cup qualifier. Near the end of a 1–1 draw between the sides, he had a heart attack and died in the medical room of Ninian Park in Cardiff, Wales. He was 62.

All content from Kiddle encyclopedia articles (including the article images and facts) can be freely used under Attribution-ShareAlike license, unless stated otherwise. Cite this article:
Jock Stein Facts for Kids. Kiddle Encyclopedia.