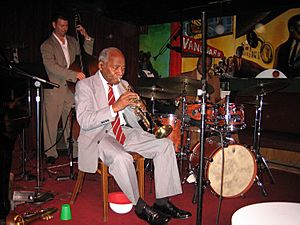 Joseph Benjamin "Joe" Wilder (February 22, 1922 – May 9, 2014) was an American jazz trumpeter, bandleader, and composer. He performed music with people such as Dizzy Gillespie, Billie Holiday, Johnny Mathis, Harry Belafonte and Tony Bennett. He was honored with the NEA Jazz Masters Award by the National Endowment for the Arts in 2008.

Wilder was an African American who was born in Colwyn, Pennsylvania and raised in Philadelphia.

All content from Kiddle encyclopedia articles (including the article images and facts) can be freely used under Attribution-ShareAlike license, unless stated otherwise. Cite this article:
Joe Wilder Facts for Kids. Kiddle Encyclopedia.