Johan Huizinga ( 7 December 1872 – 1 February 1945) was a Dutch historian and one of the founders of modern cultural history. 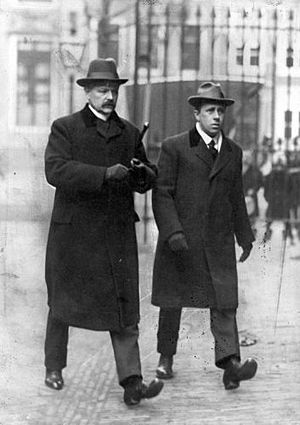 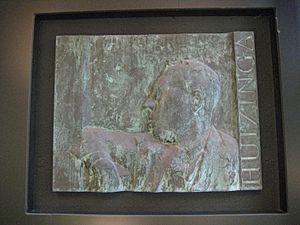 Born in Groningen as the son of Dirk Huizinga, a professor of physiology, and Jacoba Tonkens, who died two years after his birth, he started out as a student of Indo-European languages, earning his degree in 1895. He then studied comparative linguistics, gaining a good command of Sanskrit. He wrote his doctoral thesis on the role of the jester in Indian drama in 1897.

It was not until 1902 that his interest turned towards medieval and Renaissance history. He continued teaching as an Orientalist until he became a Professor of General and Dutch History at Groningen University in 1905. In 1915, he was made Professor of General History at Leiden University, a post he held until 1942. In 1916 he became member of the Royal Netherlands Academy of Arts and Sciences.

In 1942, he spoke critically of his country's German occupiers, comments that were consistent with his writings about Fascism in the 1930s. He was held in detention by the Nazis between August and October 1942. Upon his release, he was banned from returning to Leiden. He subsequently lived at the house of his colleague Rudolph Cleveringa in De Steeg in Gelderland, near Arnhem, where he died just a few weeks before Nazi rule ended. He lies buried in the graveyard of the Reformed Church at 6 Haarlemmerstraatweg in Oegstgeest.

Worthy of mentioning are also Erasmus (1924) and Homo Ludens (1938). In the latter book he discussed the possibility that play is the primary formative element in human culture. Huizinga also published books on American history and Dutch history in the 17th century.

Alarmed by the rise of National Socialism in Germany, Huizinga wrote several works of cultural criticism. Many similarities can be noted between his analysis and that of contemporary critics such as Ortega y Gasset and Oswald Spengler. Huizinga argued that the spirit of technical and mechanical organisation had replaced spontaneous and organic order in cultural as well as political life.

The Huizinga Lecture (Dutch: Huizingalezing) is a prestigious annual lecture in the Netherlands about a subject in the domains of cultural history or philosophy in honour of Johan Huizinga.

Huizinga's son Leonhard Huizinga became a well-known writer in the Netherlands, especially renowned for his series of tongue-in-cheek novels on the Dutch aristocratic twins Adrian and Oliver ("Adriaan en Olivier").

All content from Kiddle encyclopedia articles (including the article images and facts) can be freely used under Attribution-ShareAlike license, unless stated otherwise. Cite this article:
Johan Huizinga Facts for Kids. Kiddle Encyclopedia.