Johann Most facts for kids 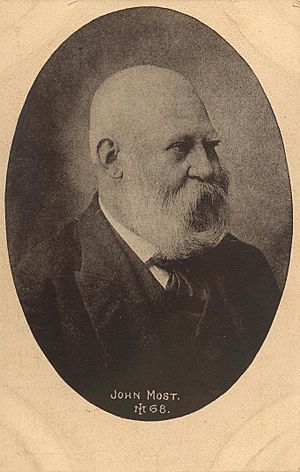 Johann Joseph Most (5 February 1846 in Augsburg – 17 March 1906 in Cincinnati) was a German-American anarchist and orator. He is best known for accepting the strategy of "propaganda of the deed," which promoted direct action against a single person or institution (including the use of violence) to force revolutionary change and inspire further action by others. He travelled in Europe, and he lived in countries such as France and United Kingdom. In 1906, in Ohio, he fell sick because of a chronic case of erysipelas, a bacterial skin infection, in an era without any antibiotic treatments. Most died in a few days.

All content from Kiddle encyclopedia articles (including the article images and facts) can be freely used under Attribution-ShareAlike license, unless stated otherwise. Cite this article:
Johann Most Facts for Kids. Kiddle Encyclopedia.