John M. Broomall was born in Upper Chichester Township, Pennsylvania to John and Sarah (Martin) Broomall. He was a twin to his sister Elizabeth Martin Broomall. He attended Samuel Smith's Quaker boarding school in Wilmington, Delaware and after graduation began studying law under John Bouvier, a prominent lawyer in Philadelphia.

He continued the study of law under U.S. Congressman Samuel Edwards, was admitted to the Delaware County bar in 1840 and commenced practice in Chester, Pennsylvania.

He was a member of the Pennsylvania House of Representatives in 1851 and 1852. He served on the State revenue board in 1854. He was an unsuccessful candidate for election in 1854 and in 1858. He was a delegate to the 1860 Republican National Convention. He moved to Media, Pennsylvania, in 1860 and continued the practice of law.

In 1862, Broomall was elected as a Republican to the Thirty-eighth, Thirty-ninth, and Fortieth Congresses. An active opponent of slavery, he signed the 13th amendment to the Constitution. He also advocated for a universal suffrage amendment. He served as chairman of the United States House Committee on Accounts during the Fortieth Congress. He was not a candidate for renomination in 1868.

In 1874, Broomall resumed the practice of law. He and his law partner William Ward began investing in real estate in Chester, Pennsylvania building homes in the south ward. Broomall was a delegate to the State constitutional convention. In March 1874, he was appointed President Judge of the newly created Thirty-Second Judicial District of Pennsylvania by Governor John F. Hartranft and served until January 1875, when he lost election to the position to Thomas J. Clayton. 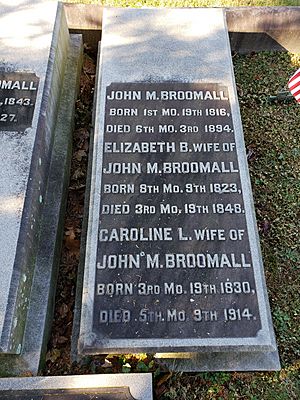 In 1841, Broomall married Elizabeth Booth and together they had two children, including Anna Broomall who was a pioneering woman physician in Pennsylvania. Broomall was a Quaker but was "read out of meeting" for marrying Elizabeth, a non-Quaker. He was not shunned, where he could no longer attend meetings but was no longer permitted to participate in the business affairs of the meeting. Broomall was known to attend the Providence Friends Meetinghouse and regularly spoke there.

His wife Elizabeth died young and in 1852 Broomall was remarried to Caroline Larkin. Together they had an additional five children, three of whom lived to adulthood.

The community of Broomall, Pennsylvania is named for John Martin Broomall. In 1868, toward the end of his time in Congress, Broomall established a new post office at the crossroads of West Chester Pike and Sproul Road. The post office was named in his honor and the community kept the name as it grew.

In 1967, the Media Swimming and Rowing Club was renamed Broomall's Lake Country Club in honor of Broomall.

All content from Kiddle encyclopedia articles (including the article images and facts) can be freely used under Attribution-ShareAlike license, unless stated otherwise. Cite this article:
John Martin Broomall Facts for Kids. Kiddle Encyclopedia.