Finn was born on 23 July 1909 in Compton, California. Finn dropped out of school after the seventh grade. He then attended General Aviation Utilities Training at Naval Station Great Lakes. In 1939, Finn married his wife Alice Finn.

Pearl harbor and after 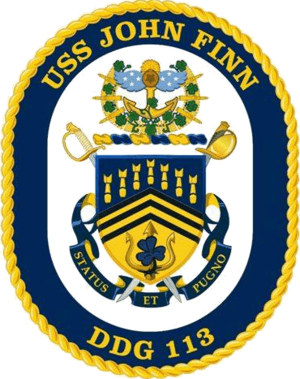 As a chief aviation ordnanceman stationed at Naval Air Station Kaneohe Bay, he earned the medal by manning a machine gun from an exposed position throughout the attack, despite being repeatedly wounded. He continued to serve in the Navy and in 1942 was commissioned an ensign.

In 1947 he was reverted to chief petty officer, eventually rising to lieutenant before his 1956 retirement. In his later years he made many appearances at events celebrating veterans. At the time of his death, Finn was the oldest living Medal of Honor recipient and the last living recipient from the attack on Pearl Harbor.

He was the first member of the armed services to earn the Medal of Honor during World War II for heroism.

His wife, Alice Finn, died in 1998. Since 1956, Finn lived in a ranch in Live Oak Springs, near Pine Valley, California.

Finn died at age 100 on the morning of 27 May 2010, at the Chula Vista Veterans Home from natural causes. He was buried besides his wife at the Campo Indian Reservation's cemetery, after a memorial service in El Cajon.

All content from Kiddle encyclopedia articles (including the article images and facts) can be freely used under Attribution-ShareAlike license, unless stated otherwise. Cite this article:
John William Finn Facts for Kids. Kiddle Encyclopedia.