Dr. José Gaspar Rodríguez de Francia y Velasco (January 6, 1766 – September 20, 1840) was a Paraguayan lawyer and politician, and the first dictator (1814–1840) of Paraguay following its independence from the Spanish Viceroyalty of the Río de la Plata. His official title was "Supreme and Perpetual Dictator of Paraguay", but he was popularly known as El Supremo.

He is considered to be the chief political leader of the faction that advocated for the full independence of Paraguay from the United Provinces of the Río de la Plata and the Empire of Brazil.

Francia was born in Yaguarón, in modern-day Paraguarí. Francia's father was an officer turned tobacco planter from São Paulo, Brazil, and his mother was a Paraguayan descended from Spanish colonisers. He was christened Joseph Gaspar de Franza y Velasco, but later used the more popular name Rodriguez, and changed Franza to the more Spanish Francia. The dictator inserted the de to style himself "Rodríguez de Francia y Velasco".

He studied at the monastery school of San Francisco, Asunción, originally in training for the Catholic priesthood, but never entered it. On April 13, 1785, after four years studying, he became a doctor of theology and master of philosophy at the College of Monserrat at the National University of Córdoba, in what would soon become Argentina.

Francia was awarded a chair of theology at the Seminary of San Carlos in Asunción in 1790. His radical views made his position as a teacher there unacceptable, and he soon gave up theology to study law. Eventually, he became a lawyer and learned five languages: (Guarani, Spanish, French, Latin and some English).

During his studies, he was influenced by the ideas of Enlightenment and later the French Revolution. Francia was disgusted by Paraguay's class system imposed by Spain, and as a lawyer would defend the less fortunate against the wealthy. A enthusiast of the Enlightenment and the French Revolution, a keen reader of Voltaire, Jean-Jacques Rousseau, and the French Encyclopedists, Francia had the largest library in Asunción.

His interest in astronomy, combined with his knowledge of French and other subjects were considered mysterious in Asunción and caused some superstitious Paraguayans to regard him as a wizard capable of predicting the future.

He demonstrated an early interest in politics. He became a provincial cabildo member in 1807, fiscal officer in 1808 and attained with difficulty the position of alcalde del primer voto, or head of the Asunción cabildo, by August 1809, the highest position he could aspire to as a criollo. He had tried before, in 1798 but failed because of his humble background.

When Paraguay's independence was declared on 15 May 1811, he was appointed secretary to the three-man ruling junta and included in the five-man governing junta by Congress meeting on June 17, 1811. On 1 August, he resigned because of the army's dominance over Congress. He was one of the few men in the country with any significant education, and soon became the country's real leader.

Paraguayans often referred to him simply as "Dr. Francia" or Karaí Guazú ("great lord" in Guaraní). A few Indians meanwhile believed he had supernatural powers: when some saw him measuring the stars with his theodolite, they thought he was talking to night demons. Francia would later use it to straighten the streets of Asunción.

On 1 October 1813, Congress named Francia and Fulgencio Yegros as alternate consuls for a year, Francia taking the first and third four-month periods. Each controlled half the army. On October 12, 1813 Paraguay declared independence from the Spanish Empire.

On 1 October 1814, Congress named him as sole consul, with absolute powers for three years. He consolidated his power to such an extent that on 1 June 1816, another Congress voted him absolute control over the country for life. For the next 24 years he ran the country with the aid of only three other people.

Francia took several precautions against assassination. He would lock the Palace doors himself, unroll the cigars his sister made to ensure there was no poison, prepare his own yerba mate, and sleep with a pistol under his pillow. Even so, a maid tried to poison him with a piece of cake. No one could come within six paces of him, or even bear a cane near him. Whenever he would go out riding, he had all bushes and trees along the route uprooted so that assassins could not hide; all shutters had to be closed, and pedestrians had to prostrate before him as he passed.

Francia lived a spartan lifestyle, and apart from some books and furniture, his only possessions were a tobacco case and a pewter confectionery box. Francia left the state treasury with at least twice as much money in it as when he took office, including 36,500 pesos of his unspent salary, the equivalent of several years' pay.

Francia died on 20 September 1840. Sensing his mortality, he destroyed all his papers and refused medical aid, even lashing out at a physician with his sabre. He was given a state funeral where the priest praised highly of him. Some old Spanish families later stole his corpse and threw it into a river, making later efforts to retrieve his remains unsuccessful.

Francia imbued Paraguay with a tradition of his absolute power, a rule that lasted, with only a few breaks, until 1989. He is still considered a national hero, with a museum dedicated to his memory in Yaguarón. It contains portraits of him and his daughter as well as his sweets box, candlestick and tobacco case. Paraguayan author Augusto Roa Bastos wrote an ambivalent depiction of the life of Francia, a novel entitled Yo el Supremo (I, the Supreme). 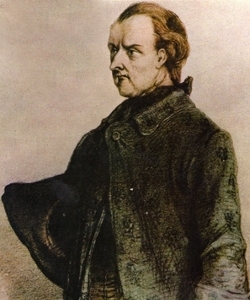