José Manuel Emiliano Balmaceda Fernández (July 19, 1840 – September 18, 1891 - aged 51) was the 11th President of Chile from September 18, 1886 to August 29, 1891. Balmaceda was part of the Castilian-Basque aristocracy in Chile. While he was president, his political disagreements with the Chilean congress led to the 1891 Chilean Civil War.

Balmaceda was born in Bucalemu. In 1865, he became one of the representatives of the government of Chile at the South American General Congress at Lima, and after his return, he obtained great distinction as an orator in the national assembly. 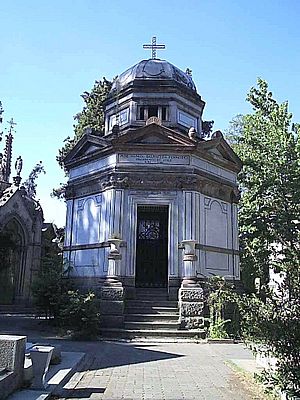 He became Minister of Foreign Affairs and of the Interior under the presidency of Domingo Santa Maria. He was elected President in 1886. On January 1, 1891 he claimed his intention to terminate an "intolerable situation" and he ordered to continue the collection of taxes.

This action provoked the Chilean Civil War of 1891, which ended with the overthrow of President Balmaceda, who later committed suicide on September 18, in the anniversary of his elevation to the Presidency. He did this rather than surrender to the new government.

His reason for this act, put forward in letters written shortly before his end, was that he did not believe the conquerors would give him an impartial trial. The death of Balmaceda finished all cause of conflict in Chile, and was the closing act of the most severe and bloodiest struggle that the country had ever witnessed.

All content from Kiddle encyclopedia articles (including the article images and facts) can be freely used under Attribution-ShareAlike license, unless stated otherwise. Cite this article:
José Manuel Balmaceda Facts for Kids. Kiddle Encyclopedia.