José de Sousa Saramago (16 November 1922 – 18 June 2010), was a Portuguese writer and recipient of the 1998 Nobel Prize in Literature. In 2003 Harold Bloom described Saramago as "the most gifted novelist alive in the world today" .

More than two million copies of Saramago's books have been sold in Portugal alone and his work has been translated into 25 languages. A proponent of libertarian communism, Saramago criticized institutions such as the Catholic Church, the European Union and the International Monetary Fund.

An atheist, he defended love as an instrument to improve the human condition. In 1992, the Government of Portugal under Prime Minister Aníbal Cavaco Silva ordered the removal of The Gospel According to Jesus Christ from the Aristeion Prize's shortlist, claiming the work was religiously offensive. Disheartened by this political censorship of his work, Saramago went into exile on the Spanish island of Lanzarote, upon which he resided until his death.

Saramago was a founding member of the National Front for the Defense of Culture in Lisbon in 1992, and co-founder with Orhan Pamuk, of the European Writers' Parliament (EWP). 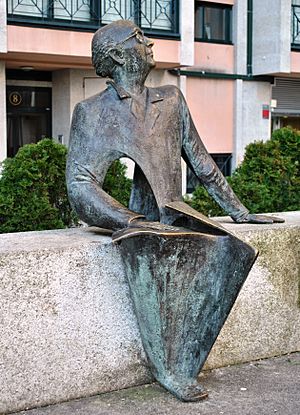 Saramago was born into a family of landless peasants in Azinhaga, Portugal, a small village in the province of Ribatejo some hundred kilometers north-east of Lisbon.

After graduating, he worked as a car mechanic for two years. Later he worked as a translator, then as a journalist. He was assistant editor of the newspaper Diário de Notícias, a position he had to leave after the democratic revolution in 1974. After a period of working as a translator he was able to support himself solely as a writer.

Saramago married Ilda Reis in 1944. Their only daughter was born in 1947. In 1986 he met Spanish journalist Pilar del Río. They married in 1988 and remained together until his death. Del Río is the official translator of Saramago's books into Spanish.

José Saramago was in his mid-fifties before he had international success; his novel Baltasar and Blimunda brought him an international readership. This novel won the Portuguese PEN Club Award. He was a member of the Portuguese Communist Party from 1969, until his death as well as an atheist and self-described pessimist.

His views have aroused considerable controversy in Portugal, especially after the publication of The Gospel According to Jesus Christ.

Saramago uses for his works fantastic scenarios. In his 1986 novel, The Stone Raft, the Iberian Peninsula breaks off from the rest of Europe and sails about the Atlantic Ocean. In his 1995 novel, Blindness, an entire country is stricken with a mysterious plague called “white blindness”.

Saramago suffered from leukemia. He died on 18 June 2010, aged 87, having spent the last few years of his life in Lanzarote, Spain. The Guardian described him as "the finest Portuguese writer of his generation", while Fernanda Eberstadt of The New York Times said he was "known almost as much for his unfaltering Communism as for his fiction".

Portugal declared two days of mourning. There were tributes from many senior international politicians, while Cuba's Raúl and Fidel Castro sent flowers. 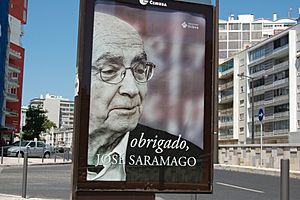 Saramago's funeral was held in Lisbon on 20 June 2010, in the presence of more than 20,000 people, many of whom had travelled hundreds of kilometres. Saramago's cremation took place in Lisbon, and his ashes were buried on the anniversary of his death, 18 June 2011, underneath a hundred year old olive tree on the square in front of the José Saramago Foundation (Casa dos Bicos).

All content from Kiddle encyclopedia articles (including the article images and facts) can be freely used under Attribution-ShareAlike license, unless stated otherwise. Cite this article:
José Saramago Facts for Kids. Kiddle Encyclopedia.