Joseph Angell Young (October 14, 1834 – August 5, 1875) was an apostle of The Church of Jesus Christ of Latter-day Saints (LDS Church). Young is one of the few Latter-day Saints in history to have been ordained to the office of apostle without ever becoming a member of the Quorum of the Twelve Apostles or the First Presidency of the church.

Young was born in Kirtland, Ohio, the eldest child of Brigham Young and Mary Ann Angell. He was baptized into the church in Kirtland by his father at the age of eight. In 1847, Young travelled with his family and a group of Mormon pioneers from Nauvoo, Illinois to the Salt Lake Valley.

Young was a missionary for the LDS Church in England from 1854 to 1856, working in Liverpool, Manchester, and Bradford. Upon his return to Utah Territory, Young married Margaret Whitehead, a native of England. She became his second wife.

Over the next few years Young was involved in the lumber industry, running several saw mills in canyons by Salt Lake City. He was also one of the main promoters of the Utah Central Railroad. 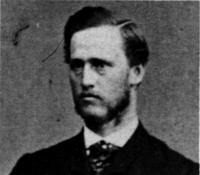 Joseph Angell Young served as a scribe of Brigham Young.

In 1872, Young was called to preside over the Sevier District of the church in present-day central Utah. He became the first stake president of the Sevier Stake when it was organized in 1874. Young served only a few months before dying unexpectedly in Manti, Utah Territory at the age of forty. At the time he was working on plan specifications for the Manti Utah Temple. He was buried in the Brigham Young Cemetery in Salt Lake City.

Young is the father of Richard Whitehead Young, who was an Associate Justice of the U.S. Territory of the Philippines Supreme Court between 1899 and 1901.

All content from Kiddle encyclopedia articles (including the article images and facts) can be freely used under Attribution-ShareAlike license, unless stated otherwise. Cite this article:
Joseph Angell Young Facts for Kids. Kiddle Encyclopedia.