The Joseph Smith Memorial Building, originally called the Hotel Utah, is named in honor of Joseph Smith, the founder of the Latter Day Saint movement. It is located on the corner of Main Street and South Temple in Salt Lake City. It is now a social center with three restaurants: The Roof Restaurant, The Garden Restaurant and The Nauvoo Cafe. It is also a venue for events complete with 13 banquet rooms, catering services, event coordinators and a full-service floral department – Flowers Squared. Several levels of the building also serve as administrative offices for The Church of Jesus Christ of Latter-day Saints (LDS Church) departments such as FamilySearch. On January 3, 1978, it was added to the National Register of Historic Places as the Hotel Utah. 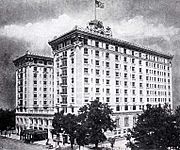 The corner of Main Street and South Temple has long been important in Utah history. Prior to construction of the Hotel Utah from 1909 to 1911, the general tithing office of the LDS Church, a bishop's storehouse, and the Deseret News printing plant all were located on the site.

Work on the Second Renaissance Revival style hotel, designed by the Los Angeles architectural firm of Parkinson and Bergstrom, began in June 1909. Two years later, on June 9, 1911, the Hotel Utah opened for business. While the LDS Church was the primary stockholder, many Mormon and non-Mormon community and business leaders also purchased stock in the effort to provide the city with a first-class hotel.

"The largest and finest bar in the West [was built] in the basement of the Hotel" to pay off a $2 million construction loan. The financing was secured by the LDS Church's presiding bishop, Charles W. Nibley, from New York financier Charles Baruch. But the scheme obviously required the sales of hard liquor.

Originally, the hotel allowed black employees, but no black guests. This policy extended to famous entertainers. Lillian Evanti, Harry Belafonte, Marian Anderson, and Ella Fitzgerald were all denied hotel rooms. Anderson was eventually allowed to stay at the Hotel, on condition that she did not use the elevator and eat her meals in her hotel room.

In 1947, the first non-white professional basketball player, Wataru Misaka, signed his first NBA contract at this hotel. At the time of his signing, according to Misaka, nonwhites were not allowed to stay in this hotel.

The ten-story building has a concrete and steel structure and is covered with white glazed terra cotta and brick. Various additions and remodelings have occurred throughout the years, including a substantial expansion to the north and modifications to the roof-top dining facilities.

It was featured in the 1973 film "Harry in Your Pocket" starring James Coburn.

The building ceased operations as a hotel in August 1987. A major remodeling and adaptive reuse project to accommodate both community and church functions was completed in 1993. Church leader Gordon B. Hinckley chose the name when he observed that there were many monuments to pioneer leader and Utah founder Brigham Young, but none to Joseph Smith.

The building was decorated with the words "SALT LAKE 2002" during the Winter Olympics.

2011 marked the celebration of 100 years since initial construction was completed on the Hotel Utah.

The Testaments of One Fold and One Shepherd is a 67-minute film shot in 65 mm and produced by The Church of Jesus Christ of Latter-day Saints. It depicts the life of Jesus in Jerusalem while depicting the events described in the Book of Mormon from approximately the same time period. The film's climax occurs after Christ's resurrection, when Jesus appears in the Americas. The movie was originally shown in the Legacy Theater on a 62x31 foot screen. It replaced Legacy: A Mormon Journey as the flagship JSMB feature in March 2000. The Testaments of One Fold and One Shepherd was later replaced in the theater by Joseph Smith: The Prophet of the Restoration, a film commemorating the 200th anniversary of the birth of Joseph Smith.

The chapel in the Joseph Smith Memorial Building.

The LDS Church now uses this building as follows:

All content from Kiddle encyclopedia articles (including the article images and facts) can be freely used under Attribution-ShareAlike license, unless stated otherwise. Cite this article:
Joseph Smith Memorial Building Facts for Kids. Kiddle Encyclopedia.