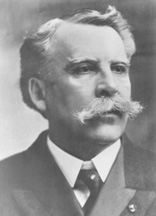 Quarles was nominated by President Theodore Roosevelt on March 6, 1905, to a seat on the United States District Court for the Eastern District of Wisconsin vacated by Judge William Henry Seaman. He was confirmed by the United States Senate on March 6, 1905, and received his commission the same day. His service terminated on October 7, 1911, due to his death in Milwaukee. He was interred in the City Cemetery in Kenosha.

Quarles had one brother, Charles, who would become his law partner.

All content from Kiddle encyclopedia articles (including the article images and facts) can be freely used under Attribution-ShareAlike license, unless stated otherwise. Cite this article:
Joseph V. Quarles Facts for Kids. Kiddle Encyclopedia.