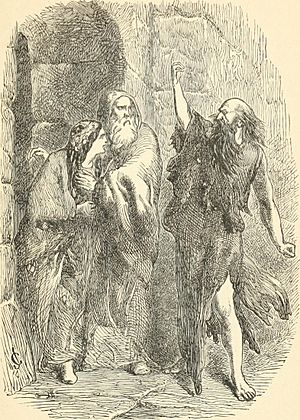 The fall of Jerusalem and the Roman conquest of Judea

In modern times, the name "Yehudah" may be used by Hebrew speakers to refer to a large southern section of Israel and the West Bank, or in the combined term Judea and Samaria to refer specifically to the West Bank.

The area was the site of the ancient Kingdom of Judah and the later Kingdom of Judea, a kingdom of the Roman Empire. The name Judea is a Greek and Roman adaptation of the name Judah and was originally applied to the whole of historic Palestine, but by the time of the New Testament it had been limited in scope to the south of the region.

Major cities in this area are Hebron, Bethlehem, Efrat and Beitar Illit. Judea is central to much of the narrative of the Torah, with the Patriarchs Abraham, Isaac and Jacob said to have been buried at Hebron in the Tomb of the Patriarchs.

All content from Kiddle encyclopedia articles (including the article images and facts) can be freely used under Attribution-ShareAlike license, unless stated otherwise. Cite this article:
Judea Facts for Kids. Kiddle Encyclopedia.