Junction is a city in and the county seat of Kimble County, Texas, United States. The population was 2,618 at the 2000 census.

Junction is named for its location at the confluence of the North and South Llano Rivers. 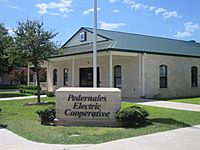 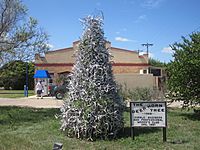 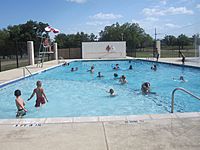 The community was founded in 1876 after the organization of Kimble County earlier that year. The original town site was named Denman after Marcellus Denman, who had surveyed and platted the new community. The name Denman was quickly changed to Junction City. In late 1876, Junction City won the designation of county seat from the unsuccessful and flood-prone settlement of Kimbleville. By 1879, a drugstore, livery stable, sawmill, and a few general stores were active in the community. Around 300 people were living in Junction City in 1882. The West Texas, Kimble County's first newspaper, began publishing in 1882. The county courthouse and its records were lost to a fire in 1884. A second, two-story brick stone courthouse was partially destroyed in an 1888 fire, but was repaired and remained in use until 1929, when the present courthouse was constructed. In 1894, Junction City became known simply as Junction. Infrastructure improvements marked the decade of the 1890s. Businessman Ernest Holekamp provided the city's first waterworks with a canal dug from the South Llano to Junction in 1895. A dam was built in 1896 on the South Llano River to provide power and water to the city and irrigation to surrounding lands.

The population stood at 536 in 1900. Four Mile Dam, a more permanent and extensive dam, was completed in 1904. Junction continued to rapidly grow, with around 800 residents living in the community in 1910. That figure had grown to 1,250 by 1920. By the late 1920s, citizens felt the need for the benefits of a municipal government. On August 27, 1927, H.O. Denman and 152 others presented an incorporation petition to Kimble County Judge J.B. Randolph. In the election, 390 votes were cast: 274 (70%) "For Incorporation" and 116 (30%) "Against Incorporation." A city officers' election took place on October 13, 1927, with Ernest Holekamp elected as Junction's first mayor. During the mid-1920s, highway connections from Junction to Menard and San Angelo were made available. A sewer system was built in 1929. In the 1930 census, the city recorded 1,415 residents. Junction was the chief shipping and commercial center of Kimble County, as well as a tourist resort and hunting center. A new municipal building and fire station were opened in 1939 and 1940, respectively. In the mid-1940s, the cedar-oil business enhanced the economy, but the city's growth slowed. Throughout the latter half of the 20th century, Junction's population continued to hover around 2,600. A 2007 US Census Bureau estimate placed the population at 2,576, a 1.6% decline from the 2000 census figure of 2,618. 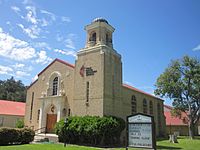 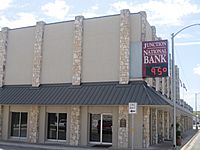 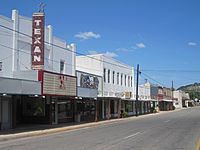 A glimpse of downtown Junction, with the defunct Texan Theater at the left

Major celebrations in Junction include the Billie Sale and Parade held in August, and the annual Kimble Kow Kick, which takes place in September.

The Kimble County Historical Museum contains documents, tools, and other relics from the days of early settlers and military artifacts. The O.C. Fisher Museum, housed in the Kimble County Library, contains an exact duplicate of the Washington office of the long-time Congressman who represented the Junction area.

Junction is home to several parks, including the 507-acre (2.05 km2) South Llano State Park. There are also eight swimming pools, golf and tennis courts, and abundant hotel/motel options due mainly to its location along the heavily traveled Interstate 10 corridor.

While coaching at Texas A&M University, Paul "Bear" Bryant's 10-day summer football camp was held in Junction in 1954. The "Junction Boys" was the nickname given to those who made it through the entire camp. The event was described by Jim Dent in his book, The Junction Boys (published in 2000) and was portrayed in an ESPN television film.

The climate in this area is characterized by hot, humid summers and generally mild to cool winters. According to the Köppen climate classification system, Junction has a humid subtropical climate, Cfa on climate maps.

All content from Kiddle encyclopedia articles (including the article images and facts) can be freely used under Attribution-ShareAlike license, unless stated otherwise. Cite this article:
Junction, Texas Facts for Kids. Kiddle Encyclopedia.