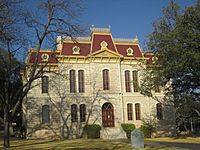 The Sutton County Courthouse is perched on a hill overlooking Sonora. 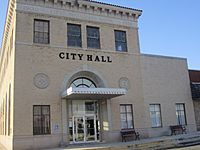 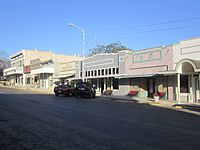 A glimpse of the eastern side of downtown Sonora 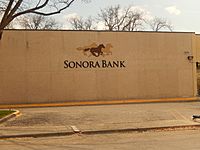 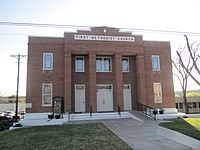 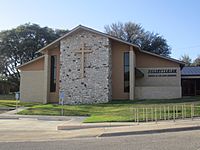 Presbyterian Church of the Good Shepherd in Sonora 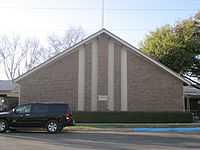 First Baptist Church Fellowship Hall in Sonora is named for J. C. Hancock, the pastor there from 1968 to 1983.

Sonora is a city in and the county seat of Sutton County, Texas, United States. The population was 3,027 at the 2010 census.

According to the United States Census Bureau, the city has a total area of 2.0 square miles (5.1 km²), all of it land.

The area lies in the western portions of the Texas Hill Country, a region of limestone outcrops and rolling terrain dotted with areas of live oaks (Quercus fusiformis) and juniper (Juniperus ashei) in the form of a woodland or savanna, alternating with a blend of various grasses and other shrubs and cacti.

Sonora's climate is subhumid and subtropical, though periods of long drought are not uncommon due to the proximity of deserts and steppes nearby, to the west. The upland location allows some of the periodic Gulf of Mexico moisture to interact with frontal systems and elevated terrain to create more clouds and precipitation than locations in the brush country to the south, or the steppes and deserts to the west and northwest. Thunderstorms with heavy rainfall are most frequent during spring and fall months, though some lighter, steady precipitation and low clouds can occur during the winter, due in large part to frontal systems originating on the plains and prairies to the north.

Summers are long and hot, often with higher humidity, though a good breeze often moderates the heat. Fall through spring months are often pleasant, though winter can experience brief periods of cold or cloudy weather.

On the night of April 2, 1901, William Carver, a member of Butch Cassidy's Wild Bunch, was shot and killed in Jack Owen's Bakery by Sheriff E.S. Briant and his deputies. Briant was trying to arrest Carver on suspicion of the murder of Oliver Thornton in Concho County.

All content from Kiddle encyclopedia articles (including the article images and facts) can be freely used under Attribution-ShareAlike license, unless stated otherwise. Cite this article:
Sonora, Texas Facts for Kids. Kiddle Encyclopedia.