Ka Lae (Hawaiian: the point), also known as South Point, is the southernmost point of the Big Island of Hawaii and of the 50 United States. The Ka Lae area is registered as a National Historic Landmark District under the name South Point Complex. The area is also known for its strong ocean currents and winds and is the home of a wind farm.

The name for the southern tip of the island of Hawaiʻi comes from Ka Lae in the Hawaiian language which means "the point". It is often spelled as one word, Kalae, or called South Point or South Cape. A confluence of ocean currents just offshore makes this spot one of Hawaii's most popular fishing spots. Both red snapper and ulua are plentiful here. Locals fish from the cliffs, some dangling perilously over the edge of steep lava ledges. Swimming here, however, is not recommended, due to the current. In fact, it is called the "Halaea Current", named after a chief who was carried off to his death. 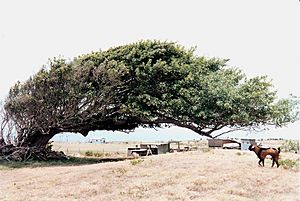 The confluence of currents also means the area is prone to accumulation of marine debris. Most of this coastline is very remote and difficult to access, and is probably the most debris-littered coast in the state, primarily due to its difficult access for debris removal. This debris poses an entanglement threat to wildlife and may refloat during storms. The shoreline is used by Hawaiian monk seals and hatchling hawksbill turtles, both endangered species. Efforts to clean the coastline are organized by the Hawaii Wildlife Fund in conjunction with the NOAA.

Ka Lae is accessible via South Point Road, a 12-mile paved narrow road leading from State Route 11 (Hawaii Belt Road), the turn off being about 7 miles (11 km) west of the village of Nāʻālehu and east of Ocean View, Hawaii. The strong winds cause some trees to become almost horizontal with their branches all growing in the same direction near the ground. The road forks near its end, with one branch leading south to Ka Lae and the other east to Papakolea Beach, known for its green sand.

Ka Lae is the southernmost point in the 50 United States.

Ka Lae is the site of one of the earliest Hawaiian settlements, and it has one of the longest archaeological records on the islands. It is generally thought that this is where the Polynesians first landed because the Big Island is the closest of the Hawaiian Islands to Tahiti, and Ka Lae would be the point of first landfall. Ruins of an ancient Hawaiian temple (heiau) and a fishing shrine can be found here. In addition, ancient Hawaiians drilled numerous holes in the rock ledges to use for mooring their canoes. Tying long ropes to their boats, they would drift out to sea to fish without fear of being carried away by the strong currents. Anthropologists from the Bishop Museum excavated the area in the 1960s.

On March 5, 1906 a small lighthouse opened at the point. In 1908 about 10 acres (4.0 ha) were set aside for the United States Coast Guard to build a house for a keeper. At the request of William Tufts Brigham of the Bishop Museum, care was taken not to destroy the archaeological site. In 1929 a steel tower was built for the light, and in 1972 a new 32 foot (10m) concrete tower with solar power. 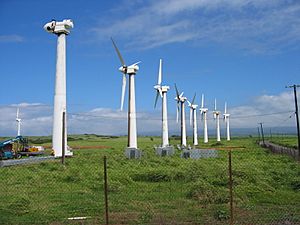 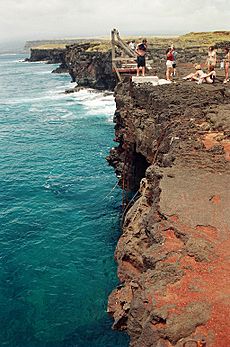 Ka Lae Point, with people getting ready to jump the cliff

During World War II, the US Air Force built a landing strip called Morse Field on the point. After the war the airfield was closed in 1953. In 1961 it was on the list of final sites to be considered by NASA to launch manned rockets to space, but was considered too remote although it was later used to launch sounding rockets for testing of instruments at the Air Force's Maui Space Surveillance Center. The low latitude of the location also made it (and nearby areas that are as remote) attractive as a site for private rocket launches, but these plans were dropped in the face of high costs and local opposition.

A space tracking station was operated from 1964 to 1965, and in the 21st century the Swedish Space Corporation's Universal Space Network again established a remote ground station for space tracking and communications, now consisting of two 13-meter parabolic antennas on the east side of South Point Road. Also at Ka Lae are the large shortwave radio antennas of World Harvest Radio International, which used callsign KWHR until 2009.

All content from Kiddle encyclopedia articles (including the article images and facts) can be freely used under Attribution-ShareAlike license, unless stated otherwise. Cite this article:
Ka Lae Facts for Kids. Kiddle Encyclopedia.