The Krkonoše or Giant Mountains, are a mountain range located in the north of the Czech Republic and the south-west of Poland, part of the Sudetes mountain system (part of the Bohemian Massif). The Czech-Polish border, which divides the historic regions of Bohemia and Silesia, runs along the main ridge. The highest peak, Sněžka, is the Czech Republic's highest point with an elevation of 1,603 metres (5,259 ft).

On both sides of the border, large areas of the mountains are designated national parks (the Krkonoše National Park in the Czech Republic and the Karkonosze National Park in Poland), and these together constitute a cross-border biosphere reserve under the UNESCO Man and the Biosphere Programme. The source of the River Elbe is within the Krkonoše. The range has a number of major ski resorts, and is a popular destination for tourists engaging in downhill and cross-country skiing, hiking, cycling and other activities. 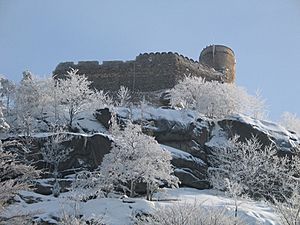 Until the High Middle Ages the mountain range and its foothills were un-populated, with deep, impenetrable forests. The first traces of human settlements probably appeared in the Duchy of Bohemia near two provincial paths between Bohemia and Silesia in the 12th century.

The first wave of colonization by Slavonic settlers goes back to the 13th century in the Kingdom of Bohemia, but only includes the foothills; the mountain ridges were still un-populated. The second wave of colonization of the foothills in the late 13th century was mostly by German settlers where they first colonized the Silesian northern part, where farming conditions were better. Many agricultural settlements, markets and handcraft communities and cities were founded at that time, and they formed a base for the further colonization of the mountain range.

The first people who explored the inner parts of the Krkonoše were treasure hunters and miners looking for gold, silver, ores and valuable stones, mainly on the Silesian side. In the 14th and 15th centuries foreigners who spoke a non-German language came to the mountains. They were called "Wallen" (see Walha), and their journeys to the "treasure" deposits were recorded in so-called "Wallenbüchern" (Wallen books). Mysterious orientation signs from these "Wallen" are visible to this day, especially on the northern side of the mountains.

he Krkonoše is the legendary home of Rübezahl, a half-mischievous, half-friendly goblin of German folklore. 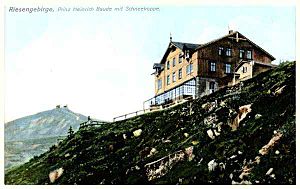 Typical for the Krkonoše are its numerous mountain huts, which are called bouda in Czech and Baude in German. Both names are derived from the Middle High German word Buode, which means booth or building. Entire colonies of mountain huts were called after the families who lived there. They are located in the higher parts or the ridge of the Krkonoše and were used by shepherds as wooden refuges in the summer.

After 1800, some of the mountain huts became interesting for the first hikers, and towards the end of the 19th century many were converted into hostels. Later, these huts were often expanded to host a larger number of guests. In other places, the old mountain huts were replaced by newer buildings which were specially built for tourism purposes. Huts from the 20th century include Petrova bouda (Peterbaude) and the hut on the summit of mount Sněžka/Śnieżka.

There are also many impressive rock formations on the main ridge. These weathered blocks of granite form high towers which often resemble humans or animals, and reach heights up to 30 metres (98 feet).

All content from Kiddle encyclopedia articles (including the article images and facts) can be freely used under Attribution-ShareAlike license, unless stated otherwise. Cite this article:
Karkonosze Facts for Kids. Kiddle Encyclopedia.