Kavaratti is the capital of the Union Territory of Lakshadweep in India. Kavaratti is a census town as well as the name of the atoll upon which the town stands. It is well known for its pristine white sand beaches and calm lagoons, which makes it a popular tourist destination. It has a distance of 2,056 km (1,278 mi) south of the city of Delhi.

The city is one of the hundred Indian cities competing in a national level competition to get the funds under Narendra Modi's flagship Smart Cities Mission. Kavaratti will be competing for the one of last 10 spots against 20 cities from across India. 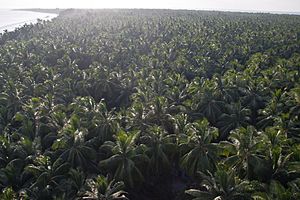 Coconut is the dominant crop on the island

Tourism is one of the primary industries on the island. The island has pristine white sand beaches, favored by tourists for sun bathing. The calm lagoons on Kavaratti island are ideal for water sports and swimming.

A number of hotels and resorts have been developed on Kavaratti in recent years. The waters around the coral atoll are rich in diverse marine life. The Kavaratti Aquarium has a rich collection of corals and a vast collection of tropical fish specimens.

The other major industries on the island are fisheries and agriculture. Coconut is the dominant crop on the island. With the ascent of tourism, the fishing industry has seen a major decline. 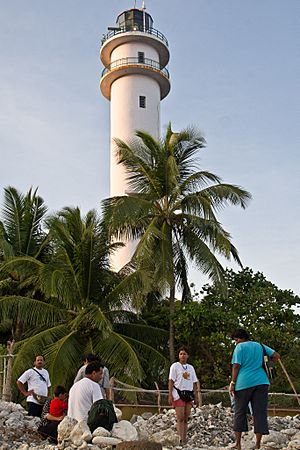 Among the most popular means of travel to Kavaratti from the Indian mainland is via an overnight voyage by passenger ships. A number of passenger liners operate from Kochi to Kavaratti.

The nearest domestic airport is on Agatti Island 54 km (29 nmi) away, followed by helicopter or boat transfers. The closest international airport is the Cochin International Airport in Kochi on the mainland.

Ground water is the major source of water supply to Kavaratti. The island has 190 ponds to collect monsoon waters and 1325 wells.

With increasing population, the Government of India commissioned a low temperature desalination plant in Kavaratti in May 2005. The desalination plant established at a cost of Template:Indian Rupees50 million has a capacity to supply 100,000 litres of drinking water every day.

All content from Kiddle encyclopedia articles (including the article images and facts) can be freely used under Attribution-ShareAlike license, unless stated otherwise. Cite this article:
Kavaratti Facts for Kids. Kiddle Encyclopedia.