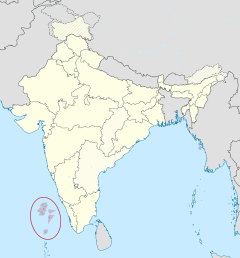 A map showing where Lakshadweep is in India

Lakshadweep are a group of islands in the Arabian Sea. They belong to India. Their capital is Kavaratti. It covers an area of 11 square miles (28 km2). Eleven of the 36 coral atoll islands of Lakshadweep are inhabited. The islands are the only coral atolls in India. The people living there are Malayalam and Mahl people, who have been influenced by Arab traders. Lakshadweep is a Muslim region just like the neighboring Maldives, where tourism is strictly regulated. Apart from the emerging tourism, government jobs, fishing and coconut production are the mainstays of the Lakshadweep economy.

All content from Kiddle encyclopedia articles (including the article images and facts) can be freely used under Attribution-ShareAlike license, unless stated otherwise. Cite this article:
Lakshadweep Facts for Kids. Kiddle Encyclopedia.