The mine property was purchased in 1873 by Abiel Abbot Low, managing director of the Low Moor Iron Company in Low Moor, Virginia, which was to be the mine's chief client. The property was kept in reserve until 1899, when the Kay Moor mine was opened to supply coal and coke to the company's blast furnaces. In 1925 the mine was sold to the New River and Pocahontas Consolidated Coal Company, a subsidiary of the Berwind-White Corporation of Philadelphia.

The town was named for James Kay, a Low Moor Iron Company employee who was in charge of building the town. Fifty houses were built in 1901, followed by 45 in 1902 and 17 in 1905. A suburb, called New Camp, was built in 1918-1919 with another 19-24 houses, and represents the only extant town site remaining. Kay Moor town's public facilities were spartan, with no churches, saloons, banks or town hall, only pairs of segregated schools at top and bottom, company stores, a pool hall and a ball field. By 1952 Kaymoor Bottom had been abandoned, and in 1960 most of its structures were destroyed by fire.

The mine was connected to the town by a single-track incline which lifted workers and equipment up a 1,000-foot (300 m) slope at a thirty-degree incline. Coal was moved along a similar double-track incline, which lowered coal to the processing plant and the coke ovens, with the cars or monitors moving in opposite directions and partially counterbalancing each other. Both inclines operated until 1962. Initial operations included 120 coking ovens, which were increased to 202 ovens during World War I. All of the beehive ovens closed in the 1930s, as they had become obsolete. 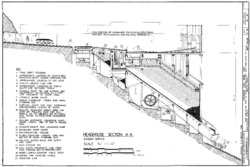 The mine itself was a room and pillar mine that was first worked with mule-drawn railcars. Locomotives later supplanted the mules.

The site is now extensively overgrown and obscured by foliage. Structures and machinery have deteriorated due to the corrosive interaction of coal dust and rainwater, while the bench level was salvaged in 1980-81. Despite this, the site retains significant amounts of mining machinery and is considered one of the most complete examples of an integrated coal mine and company town in West Virginia. The entire Kay Moor site is now located within the boundaries of New River Gorge National River.

All content from Kiddle encyclopedia articles (including the article images and facts) can be freely used under Attribution-ShareAlike license, unless stated otherwise. Cite this article:
Kay Moor, West Virginia Facts for Kids. Kiddle Encyclopedia.