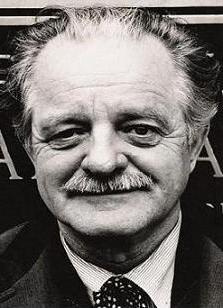 Kenneth Charles Marion Rexroth (December 22, 1905 – June 6, 1982) was an American poet, translator and critical essayist. He is regarded as a central figure in the San Francisco Renaissance, and paved the groundwork for the movement. Although he did not consider himself to be a Beat poet, and disliked the association, he was dubbed the "Father of the Beats" by Time Magazine. He was also a prolific reader of Chinese literature.

Rexroth died in Santa Barbara on June 6, 1982. He had spent his final years translating Japanese and Chinese women poets, as well as promoting the work of female poets in America and overseas. He is buried on the grounds of the Santa Barbara Cemetery Association overlooking the sea, while all the other graves face inland, his alone faces the Pacific.

All content from Kiddle encyclopedia articles (including the article images and facts) can be freely used under Attribution-ShareAlike license, unless stated otherwise. Cite this article:
Kenneth Rexroth Facts for Kids. Kiddle Encyclopedia.