Khonsu (also Chonsu, Khensu, Khons, Chons or Khonshu) is the Ancient Egyptian god of the moon. His name means "traveller", and this may relate to the nightly travel of the moon across the sky. Along with Thoth he marked the passage of time. Khonsu was instrumental in the creation of new life in all living creatures. At Thebes he formed part of a family triad (the "Theban Triad") with Mut as his mother and Amun his father. 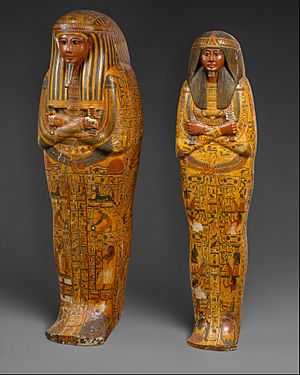 Khonsu's name reflects the fact that the Moon in Egyptian) travels across the night sky, for it means "traveller", and also had the titles "Embracer", "Pathfinder", and "Defender", as he was thought to watch over those who travel at night. As the god of light in the night, Khonsu was asked to protect against wild animals, and aid with healing.

In art, Khonsu is typically depicted as a mummy with the symbol of childhood, a side lock of hair, as well as the menat necklace with crook and flail. He has close links to other divine children such as Horus and Shu. He is sometimes shown wearing an eagle or falcon's head like Horus, with whom he is associated as a protector and healer, adorned with the sun disk and crescent moon. 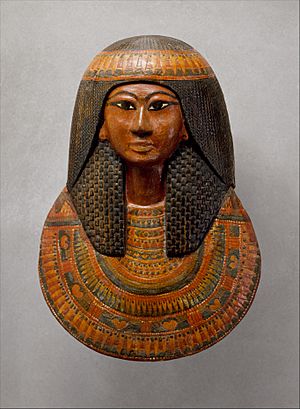 Khonsu is mentioned in the Pyramid Texts and Coffin Texts, in which he is depicted in a fierce aspect, but he does not rise to prominence until the New Kingdom, when he is described as the "Greatest God of the Great Gods". Most of the construction of the temple complex at Karnak was centered on Khonsu during the Ramesside period.

His temple at Karnak is in a relatively good state of preservation, and on one of the walls is depicted a creation myth in which Khonsu is described as the great snake who fertilizes the Cosmic Egg in the creation of the world.

Khonsu's reputation as a healer spread outside Egypt and other locations of Khonsu's cult were Memphis, Hibis and Edfu. As a healer records show how a princess of Bekhten was instantly cured of an illness upon the arrival of an image of Khonsu. King Ptolemy IV, after he was cured of an illness, called himself "Beloved of Khonsu Who Protects His Majesty and Drives Away Evil Spirits".

All content from Kiddle encyclopedia articles (including the article images and facts) can be freely used under Attribution-ShareAlike license, unless stated otherwise. Cite this article:
Khonsu Facts for Kids. Kiddle Encyclopedia.