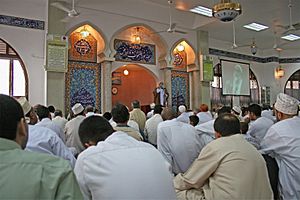 Worshippers listening to the Khutbah, delivered by an imam in Dar es Salam

'Khutbah serves as the primary formal occasion for public preaching in the Islamic tradition. Such sermons occur regularly, as prescribed by the teachings of all legal schools. The Islamic tradition can be formally observed at the dhuhr (noon) congregation prayer on Friday. In addition, similar sermons are called for on the two festival days.

The The Ahmadiyya Muslim Community, in particular, has abided by this tradition religiously; through the use of their broadcasting channel, Muslim Television Ahmadiyya International, the fifth Ahmadi caliph, Hazrat Mirza Masroor Ahmad personally delivers the Friday sermon every week.

The khutbah originates from the practice of the Islamic prophet, Muhammad, who used to deliver words of encouragement, instruction or commands at gatherings for worship in the mosque.

All content from Kiddle encyclopedia articles (including the article images and facts) can be freely used under Attribution-ShareAlike license, unless stated otherwise. Cite this article:
Khutbah Facts for Kids. Kiddle Encyclopedia.