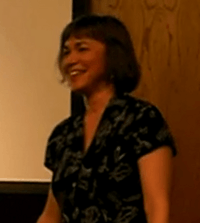 In her poetry, she wrote mainly in traditional forms, particularly sonnets. She was the director of Poetry by the Sea: A Global Conference, created in 2014 and first held in May 2015. She directed the West Chester University Poetry Conference from 2010 through 2014. She was born in Coal Valley, Illinois. Bridgford started teaching at Fairfield University in Connecticut in 1989.

All content from Kiddle encyclopedia articles (including the article images and facts) can be freely used under Attribution-ShareAlike license, unless stated otherwise. Cite this article:
Kim Bridgford Facts for Kids. Kiddle Encyclopedia.