Knights Ferry is an unincorporated historic community in Stanislaus County, California, United States. Nestled in the foothills of the Sierra Nevada, it is about 30 miles (48 km) east of Modesto on the Stanislaus River. The Williams Ranch near the town, was one of many filming locations for the television series Bonanza and Little House on the Prairie.

Knights Ferry is home to the Knights Ferry Bridge, the longest covered bridge west of the Mississippi River at 330 feet (100 m) in length. It is also home to a K-8 elementary school and a museum about the history of the town and also about local wildlife. The town's ruins include a mill and a jail.

When gold was discovered in California in 1849, Dr. William Knight rediscovered a place which he and John C. Fremont had previously found to be a favorable river crossing, and established a ferry boat there. Soon, the ferry boat prospered and Knight and Captain Vantine built a hotel and trading post near the crossing. On November 9, 1849, Knight was killed by a gunfight on the town's main street; he was buried in an unmarked grave. The Dents immediately took possession of Bill Knight's property at Knight's Ferry following the murder. 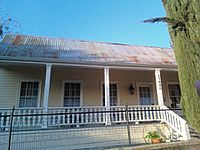 Knights Ferry was also the county seat in 1862, as it replaced La Grange. It was soon succeeded by the new, prosperous railroad boomtown of Modesto in 1871.

After Knight's death, Vantine operated the ferry alone until he formed another collaboration with John and Lewis Dent. In 1852, Vantine sold his properties in the area to the Dents and moved elsewhere. A new townsite under the name of "Dentville" was laid out by John Dent. The inhabitants continued to call the town "Knights Ferry" and "Knights Crossing". In 1852, a toll bridge replaced the ferry. It was destroyed by the Great Flood of 1862. The new covered bridge was built at a higher level than the previous one, and it still stands today. The bridge was used for car traffic until it was closed to prevent damage in 1985. 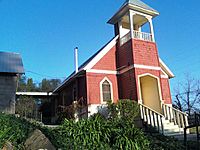 The following is a list of historic contributions that make up the Knights Ferry Historic District.

Located next to Knights Ferry is the Knights Ferry Recreation Area, managed by the U.S. Army Corps of Engineers. This recreation area includes a "put in" location for Class I-II rafting trips on the Stanislaus River. Rafting most often occurs April through October. Water in the lower Stanislaus is discharged from the base of New Melones Dam, resulting in clear and cold water even in the warmest months of summer. The Army Corps of Engineers maintains recreational facilities along the Stanislaus River. Park Rangers caution rafters to exercise caution and use life vests, as the rapids below Knights Ferry can be challenging when the river is high. River Journey Adventures has been providing raft and kayak rentals since 1985 from their river store in downtown Knights Ferry.

The ZIP Code is 95361. The town is inside area code 209. Knights Ferry is part of the Modesto Metropolitan Statistical Area.

According to the Köppen Climate Classification system, Knights Ferry has a warm-summer Mediterranean climate, abbreviated "Csa" on climate maps.

All content from Kiddle encyclopedia articles (including the article images and facts) can be freely used under Attribution-ShareAlike license, unless stated otherwise. Cite this article:
Knights Ferry, California Facts for Kids. Kiddle Encyclopedia.