Koolasuchus is an extinct genus of brachyopoid temnospondyl in the family Chigutisauridae. Fossils have been found from Victoria, Australia and date back 120 Ma to the Aptian stage of the Early Cretaceous. Koolasuchus is the youngest known temnospondyl. Koolasuchus is known from several fragments of the skull and other bones such as vertebrae, ribs, and pectoral elements. The type species Koolasuchus cleelandi was named in 1997. 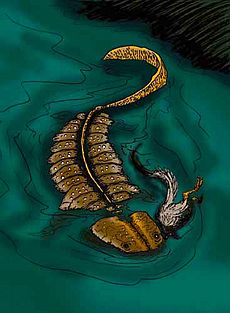 Restoration of Koolasuchus preying on Leaellynasaura

Koolasuchus was an aquatic temnospondyl estimated to have been around 4 to 5 metres (13 to 16 ft) in length. Its mass has been estimated to be up to 500 kilograms (1,100 lb). Although represented by incomplete material, the skull was likely 65 centimetres (26 in) long. Like other chigutisaurids, it had a wide, rounded head and tabular horns projecting from the backside of the skull.

Koolasuchus was named in 1997 from the Aptian Strzelecki Group of the Wonthaggi Formation in Victoria. It is known from four fragments of the lower jaw and several postcranial bones, including ribs, vertebrae, a fibula, and parts of the pectoral girdle. A jawbone was found in 1978 in a fossil site known as the Punch Bowl near the town of San Remo. Later specimens were found in 1989 on the nearby Rowell's Beach. A partial skull is also known but has not been fully prepared. Koolasuchus was named for the palaeontologist Lesley Kool. The name is also a pun on the word "cool" in reference to the cold climate of its environment. The type species K. cleelandi is named after geologist Mike Cleeland.

Koolasuchus inhabited rift valleys in southern Australia during the Early Cretaceous. During this time the area was below the Antarctic Circle, and temperatures were relatively cool for the Mesozoic. Based on the coarse-grained rocks in which remains were found, Koolasuchus likely lived in fast-moving streams. As a large aquatic predator, it was similar in lifestyle to crocodilians. Although eusuchians and kin were common during the Early Cretaceous, they were absent from southern Australia 120 million years ago, possibly because of the cold climate. By 110 Mya, represented by rocks in the Dinosaur Cove fossil locality, temperatures had warmed and crocodilians had returned to the area. These crocodilians likely displaced Koolasuchus, leading to its disappearance in younger rocks.

All content from Kiddle encyclopedia articles (including the article images and facts) can be freely used under Attribution-ShareAlike license, unless stated otherwise. Cite this article:
Koolasuchus Facts for Kids. Kiddle Encyclopedia.