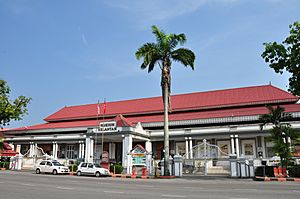 Kota Bharu is a city in Malaysia that serves as the state capital and royal seat of Kelantan. It is also the name of the territory (jajahan) or district in which Kota Bharu City is situated. The name means 'new city' or 'new castle/fort' in Malay.

Kota Bharu is situated in the northeastern part of Peninsular Malaysia, and lies near the mouth of the Kelantan River. The northeastern Malaysian city is close to the Thailand border.

Kota Bharu is home to many mosques, various museums, the unique architecture of the old royal palaces (still occupied by the sultan and sultanah and off-limits to visitors but viewable from outside) and former royal buildings (which can be visited) in the centre of town.

The City is served by Keretapi Tanah Melayu's East Coast Line at the nearby Wakaf Bharu Terminal Station, in the town of Wakaf Bharu across the Kelantan River and Sultan Ismail Petra Airport, located in Pengkalan Chepa. 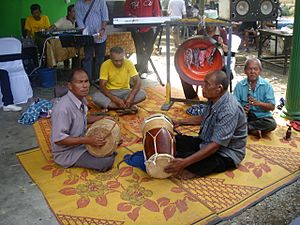 A wedding ceremony at the Tegayong National School

Kota Bharu was founded during the late 19th century. Before the establishment, Kota Bharu was home to Kelantan's Royal Palace, then established by Sultan Muhammad II of Kelantan in 1844 as Kelantan's state capital who wanted the new state capital built in his honour. During the 19th century, Kelantan was a prosperous state with a population of around 30,000 to 50,000 people including a thousand Chinese.

Production from within the state include gold, tin ore, black pepper, areca nut, rice, rattan, bamboo, agar-wood and songket. Kota Bharu acts as port for goods due to its location beside the Kelantan River.

Pantai Sabak, about 10 km (6.2 mi) from Kota Bharu, was the initial landing point of the Japanese invasion forces on 8 December 1941 in their Malayan campaign, when they successfully engaged the British in jungle warfare and ultimately captured Singapore. 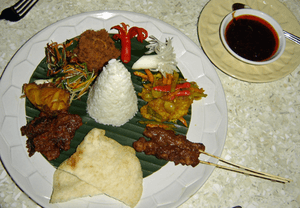 The Kelantanese culture is highly distinctive as compared to other state of Malaysia but also with some influences from Thailand. The Chinese and Indians fit in more easily to local culture than those in other parts of Malaysia. Much of the food is sweet, with rice as the primary staple. Traditional dances like Mak Yong and Wayang Kulit were once widely practised. 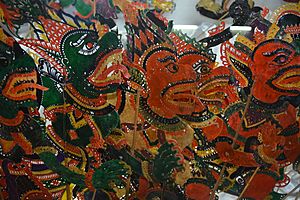 Strong surf threatens all major beaches in the vicinity of Kota Bharu with substantial erosion. The community has been using wave breakers by piling up massive amounts of boulders in an effort to protect the coastline. Regular beach activity has become impossible as visitors frequent beaches further south. In terms of tourism, the most famous beach in Kota Bharu is Pantai Cahaya Bulan.

Diving in Kota Bharu is a relatively new activity. At present, only one dive shop operates in the area. Trips out to the wreck of the IJN Awazisan Maru (known locally as the "Japanese Invasion Wreck") are among the sites offered. This Japanese transport ship was the very first vessel to sink in the Pacific War. The wreck is a 30-minute boat journey from a jetty which is 10 minutes outside of Kota Bharu.

All content from Kiddle encyclopedia articles (including the article images and facts) can be freely used under Attribution-ShareAlike license, unless stated otherwise. Cite this article:
Kota Baru Facts for Kids. Kiddle Encyclopedia.