Krascheninnikovia lanata is a species of flowering plant in the family Amaranthaceae, known by the common name winterfat. It is native to much of western North America: from central Western Canada; through the Western United States; to northern Mexico.

The genus was named for Stepan Krasheninnikov—the early 18th-century Russian botanist and explorer of Siberia and Kamchatka.

Winterfat grows in a great variety of habitats at 100–2,700 metres (330–8,860 ft) in elevation—from grassland plains and xeric scrublands to rain shadow faces of montane locations.

Winterfat is a halophyte that thrives in salty soils such as those on alkali flats, including those of the Great Basin, Central Valley, Great Plains, and Mojave Desert. 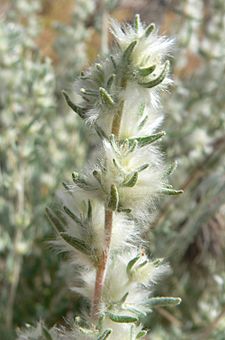 Krascheninnikovia lanata is a small shrub sending erect stem branches to heights between 0.5–1 metre (1.6–3.3 ft). It produces flat lance-shaped leaves up to 3 centimeters long. The stems and gray foliage are covered in woolly white hairs that age to a reddish color.

The pistillate flowers have smaller bracts and develop tiny white fruits. The silky hairs on the fruits allow for wind dispersal.

Krascheninnikovia lanata is cultivated in the specialty plant nursery trade as an ornamental plant for xeriscape and wildlife gardens, and native plant natural landscapes. The light gray foliage can be a distinctive feature in garden designs. The plants are very long-lived.

This species is an important winter forage for grazing domestic and wild animals because it is evergreen, hence its common name.

Winter fat was a traditional medicinal plant used by many Native American tribes that lived within its large North American range. These tribes used traditional plants to treat a wide variety of ailments and for other benefits. The Zuni people use a poultice of ground root bound with a cotton cloth to treat burns.

All content from Kiddle encyclopedia articles (including the article images and facts) can be freely used under Attribution-ShareAlike license, unless stated otherwise. Cite this article:
Krascheninnikovia lanata Facts for Kids. Kiddle Encyclopedia.