Kronenwetter is a village in Marathon County, Wisconsin, United States. It is the largest village by land area (although Suamico is larger when its water area is added) in the state of Wisconsin, as well as in the entire United States, and the third-largest community by population in Marathon County. It is part of the Wausau, Wisconsin Metropolitan Statistical Area. As of the 2010 census, the population of Kronenwetter was 7,210, an increase from the 2000 census which had the community at 5,369.

Prior to the formation of the town of Kronenwetter, the area was composed of several small settlements. Around 1855, a Native American named Keeler dug a canal, rerouting the Bull Jr. Creek over a drop to power a small sawmill he built. Other buildings were built, and the area became known as Keelerville. In 1857, Sebastian Kronenwetter moved to the area and purchased the Keelerville sawmill, making it quite successful. In the years to follow, Kronenwetter continued his success, owning a hotel and building a sawmill in what is now the city of Mosinee. In 1885, he was elected to the Wisconsin State Assembly.

On November 11, 1886, the eastern section of the town of Mosinee was formed into a new town known as Kronenwetter. In 1902, Sebastian Kronenwetter died and was buried in the Mosinee cemetery.

Kronenwetter expanded around 1910 when the Worzella brothers purchased 26,000 acres (110 km2) of land and built the Polish community of Peplin near the intersection of County Highway X and East State Highway 153. The brothers constructed a sawmill, store, office, blacksmith shop, and living quarters for the workers. To advertise their new community, the brothers printed brochures describing the area in Polish and sent them to major cities in the United States. They also put advertisements in Polish-language newspapers in those cities. To entice the Polish people to come, the brochures included pictures of beautiful farms, including buildings and livestock. Among the first to arrive were Vince Ruzga, Albert Wonsil and Alex Dyda. The Worzella brothers built homes for the settlers starting from $350 for a three-room house and $450 for a five-room house. The sawmill eventually was shut down, but others were built in the area and were supported by the community, as the lumber was needed for homes. The sawmills ceased operation in 1930. During those years, schools were built throughout the town and population expanded.

In the election of November 5, 2002, the residents chose by a referendum to create the Village of Kronenwetter from most of the town; this became effective on November 20. The first village board of trustees was sworn into office on January 13, 2003. On February 24, 2003, the village annexed the remainder of the town, dissolving the town as a legal entity.

Residents of Kronenwetter use the postal zip code of 54455 for the nearby city of Mosinee, though Kronenwetter has a larger population than Mosinee. In the spring of 2010, residents were surveyed by the US Postal Service to see whether residents would like to be able to use "Kronenwetter, WI 54455" as a valid address, and a majority of residents voted yes. The joint 54455 zip code went into effect in mid-2010.

In the 2000 census, separate reports were prepared for the most densely populated section or district. These are reported as the Evergreen census-designated place, but are also included in the aggregate numbers given here.

There were 2,652 households, of which 38.4% had children under the age of 18 living with them, 65.9% were married couples living together, 7.1% had a female householder with no husband present, 5.0% had a male householder with no wife present, and 22.0% were non-families. 15.8% of all households were made up of individuals, and 4.8% had someone living alone who was 65 years of age or older. The average household size was 2.71 and the average family size was 3.03. 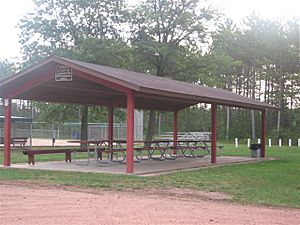 Municipal Park which has shelters, playgrounds and ball diamonds

All content from Kiddle encyclopedia articles (including the article images and facts) can be freely used under Attribution-ShareAlike license, unless stated otherwise. Cite this article:
Kronenwetter, Wisconsin Facts for Kids. Kiddle Encyclopedia.