McCormick (as he was known) was born in Chicago, May 27, 1859. He was the youngest of four children born to Henrietta (née Hamilton) McCormick and Leander J. McCormick.

His grandfather Robert McCormick of Virginia invented agricultural machinery. His father, Leander J. McCormick, came to Chicago in 1848 and was a partner with his brothers, Cyrus and William to form what would become International Harvester.

At the age of fourteen, McCormick invented a non-pickable door lock. While at college he invented two automatic railroad car couplers and a ballot box to register votes and prevent fraud at the polls. His principal sport in youth was boxing. He was one of the founders of the Amherst chapter of the Beta Theta Pi Society. McCormick received his education principally at Phillips Academy, Andover, and at Amherst College, graduating in the class of 1881.

After graduating from Amherst he resided for several years in New York City, where he took a course in law at Columbia Law School in New York City and studied architecture. He also devoted his time to his study of Characterology. After finishing his education he traveled in the United States, Europe, northern Africa, Mexico, Central America, Yucatan, the West Indies and the Bermudas.

McCormick reportedly made over a hundred inventions and took out many patents. However, since he inherited a fortune, he did not need to earn a living. He claimed to have invented an aerial torpedo, motorcycles, eyeglasses for looking backward while driving, a watch which shows the time the world over, an electric rotary brush, an electric rotary razor, an apparatus to locate vessels in a fog at sea, a boat which will not rock in rough water, a quadricycle to lessen vibration upon rough roads, an hydroplane for skimming over the surface of the water, an ambulance to prevent shock or vibration to its occupant, an audiophone for theatre use, a water cycle, a scheme to bridge the English Channel, and finally at the end of the World War I an improvement in war tanks, which came just as hostilities ended.

During World War I, he was a government consultant at Washington, DC on financial, military and naval issues.

In sculpture his principal works were a three-quarter-life sized statue entitled "Sapho" one of "Victory," and a figure emblematic of "The Birth of a Spirit." 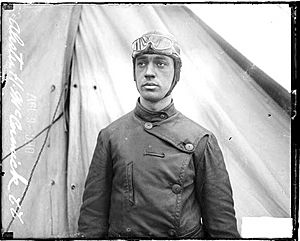 In 1886, while touring Europe, he met Constance Plummer (1865–1938), the daughter of Edward Plummer, of Canterbury, England, whom he married on February 15, 1887. Together, Hamilton and Constance were the parents of three sons:

He died on February 2, 1934 and was buried at Woodlawn Park Cemetery in Miami, Florida. To each of his widow and three sons he left a trust fund of $800,000.

His mansion, at 100 E. Ontario Street, Chicago, has been the home of Lawry's The Prime Rib restaurant since the 1974. It is in the River North neighborhood just half a block off the Michigan Avenue shopping district.

All content from Kiddle encyclopedia articles (including the article images and facts) can be freely used under Attribution-ShareAlike license, unless stated otherwise. Cite this article:
L. Hamilton McCormick Facts for Kids. Kiddle Encyclopedia.