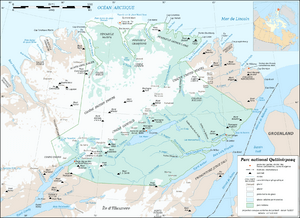 The area around the lake is a thermal oasis within a polar desert, with summer temperatures up to 20 °C (68 °F).

The lake is part of Quttinirpaaq National Park.

Artifacts of Thule civilization were discovered near Lake Hazen in 2004. Thule preceded the Inuit. In 1882, Adolphus Greely discovered the lake during his 1881–1883 expedition. Greely's base camp for the exploration was Fort Conger at the northeastern shore of Ellesmere Island, at 81°44′N 64°44′W﻿ / ﻿81.733°N 64.733°W﻿ / 81.733; -64.733﻿ (Greely's base camp (Lake Hazen)), which was established as part of the first International Polar Year. Greely named the lake in honour of General William Babcock Hazen, who had organized the expedition. Camp Hazen was established on the northern shore of the lake in 1957 during the International Geophysical Year (IGY), and has been used by various scientific parties since then.

Lake Hazen is populated by two morphotypes of Arctic char, a larger and a smaller. Studies in the 1990s indicated neither char morphotype is anadromous, but Inuit traditional knowledge states otherwise.

All named rivers and creeks are listed in a clockwise manner, starting in the south:

At the southwestern end (from south to north):

On the northwest coast (from southwest to northeast):

At the northeast end (from north to south):

Hikers can start their hiking trips at Lake Hazen itself, or from Tanquary Fiord warden station at Tanquary Fiord Airport 70 km (43 mi) southwest of the lake.

All content from Kiddle encyclopedia articles (including the article images and facts) can be freely used under Attribution-ShareAlike license, unless stated otherwise. Cite this article:
Lake Hazen Facts for Kids. Kiddle Encyclopedia.