Lake Hemet is a water storage reservoir located in the San Jacinto Mountains in Riverside County, California, with a capacity of 14,000 acre feet (17,000,000 m3) of water. It was created in 1895 with the construction of the Hemet Dam, and is owned and operated by the Lake Hemet Municipal Water District (LHMWD). 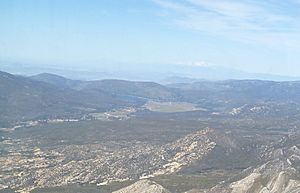 Aerial photo as seen from above the Anza Pass at 8,500 feet MSL.

Lake Hemet is an artificial lake in the San Jacinto Mountains, 4,340 ft (1,323 m) above sea level. Lake Hemet is part of the San Bernardino National Forest. Lake Hemet has a surface area of 470 acres (190 ha) and 12 miles (19 km) of shoreline. Fishing is the primary attraction to the lake, which is stocked with rainbow trout, channel catfish, bluegill and Largemouth bass. Other Lake Hemet activities include boating, picnicking, hiking, and camping in the surrounding areas.

LHMWD provides water from Lake Hemet to a geographically diverse service area in Riverside County, including portions of the cities of Hemet and San Jacinto, and to the isolated but growing 4,500-foot (1,400 m) high San Jacinto Mountain community of Garner Valley.

LHMWD's customers are represented by a publicly elected board of five directors in 5 divisions, representing approximately 13,800 domestic and 51 agricultural customers within a 26-square mile (67 km²) service area. 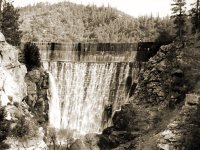 Development of the San Jacinto Valley can be traced to 1887, with the formation of the Lake Hemet Water Company and the Hemet Land Company by Edward L. Mayberry, his wealthy San Francisco friend, William F. Whittier, and their partners. These two companies allowed the partnership to acquire land and water rights from the San Jacinto Valley to the west end of Garner Valley in the San Jacinto Mountains.

Lake Hemet Water Company placed the first stone of the Hemet Dam on January 6, 1891. When this arched masonry structure was completed in 1895 at a height of 122.5 feet (37.3 m), it was the largest solid masonry dam in the world—a title it would retain until the construction of Roosevelt Dam in Arizona in 1911. In 1923, the Hemet dam was raised to a height of 135 feet (41 m).

The 1932 opening of the Pines to Palms Highway (SR 74) from the coast to Palm Desert was significant in developing Lake Hemet for increased recreational uses.

LHMWD was founded on September 27, 1955, to take over the activities of the Lake Hemet Water Company, purchasing the Lake Hemet water system with funds raised through a bond initiative.

Shots of the lake were used in the 1980s CBS television show Airwolf, in which recurring character Stringfellow Hawke lived in a cabin on the lake.

All content from Kiddle encyclopedia articles (including the article images and facts) can be freely used under Attribution-ShareAlike license, unless stated otherwise. Cite this article:
Lake Hemet Facts for Kids. Kiddle Encyclopedia.