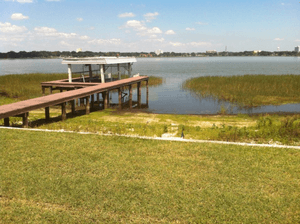 The Calusa were the first known people to live along this lake. The Seminole were later known to live and hunt along the lake. Lake Howard was first surveyed by Dr. John Westcott in 1849. He named the lake for his neighbors in Madison County, Florida, the Howard family. The lake, with its current name, appears in the first United States government maps of the area, published in 1854.

Lake Howard became one of the first areas to be settled by newly arriving American and European settlers. Some of the oldest homes in the city of Winter Haven are located on the shores of Lake Howard. Beymer Memorial United Methodist Church, located on the north-east side of the lake, is one of the oldest buildings in Winter Haven. On the north side of Lake Howard is the residential neighborhood of Interlaken. This neighborhood is a designated U.S. Historic District, with over 50 homes on the National Register of Historic Places.

By the late 1960s, Lake Howard started to become polluted. The single biggest problem was that over-flow capacity lines for the Jan Phyll Village Waste Water Treatment Facility, which fed directly into Lake Howard. This meant that raw sewage was periodically sent directly into the lake. This problem was corrected in 1977, when the waste facility was re-designed. In 1980, an important restoration study was done on Lake Howard to improve the water quality. Over the preceding years, many other major scientific studies were conducted on Lake Howard, often building upon work done in previous studies. In 1995, Dr T.J. Whitmore conducted a major paleolimnological study on Lake Howard. By examining sediment core samples, he was able to evaluate historical changes in water levels and water quality in Lake Howard. Today, through conservation and restoration efforts, by the city, state, and federal government, the water quality of Lake Howard continues to improve. However, rapid urbanization around the lake threatens its future health. 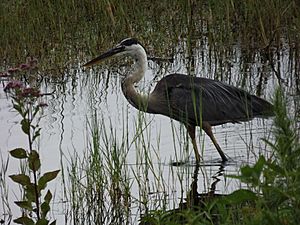 Great Blue Heron on the shore of Lake Howard.

South Lake Howard Nature Park is located on the south-west side of Lake Howard. The park is an important role in the restoration of the ecology and water quality of Lake Howard. It is also plays an important role in the reclamation of natural wetlands within the city of Winter Haven. The park has multi-use trails, picnic areas, and restrooms. The park also has a wooden boardwalk running over the wetlands, which provides a good vantage point for observing local wildlife. Great blue heron, green heron, great egret, snowy egret, osprey, grackle, and red-winged blackbird are a few of the many bird species regularly seen on the lake. Bald eagles are occasionally seen on the Lake. The lake supports a healthy population of alligators and other reptiles and amphibians. Lake Howard is also known as a world class location with fresh water fishing, particularly for large mouth bass and bluegill. The Chain of Lakes Trail, a paved multi-use hiking and biking trail, begins here.

All content from Kiddle encyclopedia articles (including the article images and facts) can be freely used under Attribution-ShareAlike license, unless stated otherwise. Cite this article:
Lake Howard (Winter Haven, Florida) Facts for Kids. Kiddle Encyclopedia.