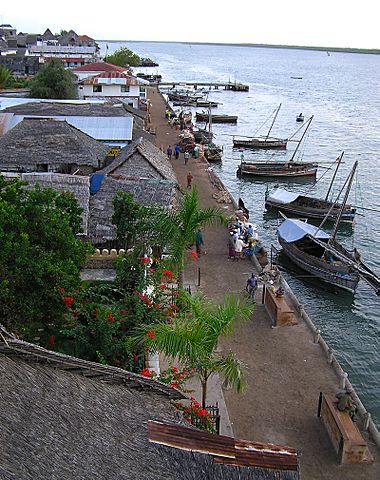 View of the seaside, Lamu Town

Lamu or Lamu Town is a small town on Lamu Island in Kenya. Situated 341 kilometres (212 mi) by road northeast of Mombasa.

Lamu Town on Lamu Island is Kenya's oldest continually inhabited town and was one of the original Swahili settlements along coastal East Africa. It is believed to have been established in 1370. It is a UNESCO World Heritage site.

The town was founded in the 14th century and it contains many fine examples of Swahili architecture. The old city is inscribed on the World Heritage List as "the oldest and best-preserved Swahili settlement in East Africa".

The town contains the Lamu Fort on the seafront. The fort was completed by the early 1820s. 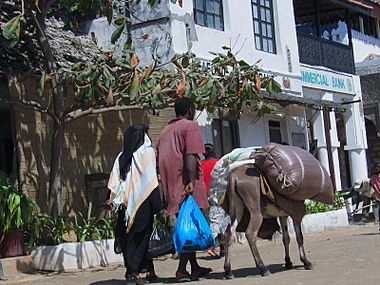 Locals using a donkey for transport

In 2011, proposals were being advanced to build a deep-water port which would have much greater capacity in terms of depth of water. China has begun to transform Lamu into the largest port in East Africa.

Since the island has no cars, transportation and other heavy work is done with the help of donkeys. There are some 3000 donkeys on the island.

The song "Lamu" by Christian singer Michael W. Smith is inspired by the island. The song is about running away from life's problems.

Lamu is the setting of Anthony Doerr's short story "The Shell Collector" from his collection of stories by the same name.

All content from Kiddle encyclopedia articles (including the article images and facts) can be freely used under Attribution-ShareAlike license, unless stated otherwise. Cite this article:
Lamu Facts for Kids. Kiddle Encyclopedia.