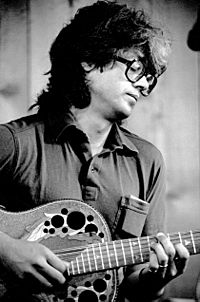 In the early 1970s, he led a group called Foreplay with Mike Mandel although the albums of this period—Barefoot Boy, Offering, and The Real Great Escape—were credited only to "Larry Coryell." He formed the group The Eleventh House in 1973.

Coryell was born in Galveston, Texas. He was raised in Richland, Washington. He studied at the University of Washington. Coryell died on February 19, 2017 in his hotel room in New York City from cardiac arrest, aged 73.

All content from Kiddle encyclopedia articles (including the article images and facts) can be freely used under Attribution-ShareAlike license, unless stated otherwise. Cite this article:
Larry Coryell Facts for Kids. Kiddle Encyclopedia.