Latta was established in 1887. The town arose from a need for a railroad, which helped to eliminate "the need to travel to Wilmington, North Carolina, in order to reach many points in South Carolina." Thus, the Atlantic Coast Line Railroad built two depots; one in the city of Dillon and the other 7 miles (11 km) to the south in Latta. The depots were completed in 1888. Many families were drawn to this area, and in March 1890, "the town of Latta was incorporated by the state legislature and received its charter."

The town was named for the Latta family of settlers. More specifically, it was named after Captain Robert Latta, who was from York County, South Carolina; he orchestrated the engineering for the Atlantic Coast Line Railroad. Captain Latta not only surveyed the area for the railroad, but he also constructed the original plans for the town of Latta. Because of Latta's railroad facilities, the town grew rapidly, especially from 1900 to 1910.

Latta has an established historic district, mostly located on Main Street, and many of these structures are listed in the National Register of Historic Places. Latta has about 55 properties, constructed between ca. 1890 and ca. 1930, that are a part of the historic district. Furthermore, Latta is home to one of the thirteen Carnegie public library buildings in South Carolina. The Latta library opened in 1914 and is "one of five of South Carolina's original 14 Carnegie libraries still in use as a library." The post office in Latta has been in operation since 1888.

In June 2014, Latta residents voted in favor of changing from a "strong mayor" government to a "strong council" government.

According to the United States Census Bureau, the town has a total area of 1.1 square miles (2.8 km2), all of it land.

There were 580 households out of which 25.9% had children under the age of 18 living with them, 43.6% were married couples living together, 21.4% had a female householder with no husband present, and 31.2% were non-families. 29.7% of all households were made up of individuals and 15.7% had someone living alone who was 65 years of age or older. The average household size was 2.43 and the average family size was 3.01. 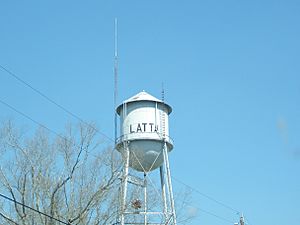 All content from Kiddle encyclopedia articles (including the article images and facts) can be freely used under Attribution-ShareAlike license, unless stated otherwise. Cite this article:
Latta, South Carolina Facts for Kids. Kiddle Encyclopedia.