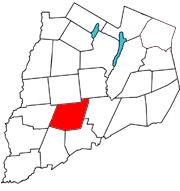 Laurens is a town in Otsego County, New York, United States. The population was 2,424 at the 2010 census.

The Town of Laurens is in the south half of the county, north of the City of Oneonta. There is also a village named Laurens, located in the town.

The town was first settled by Europeans around 1773. Joseph Mayall arrived in 1773 about one mile north of the present Laurens village. The raiding party responsible for the Cherry Valley Massacre also pillaged part of Laurens and burned some property.

The town was formed from the Town of Otsego in 1810. It was named for Revolutionary War hero Henry Laurens.

A resort developed by the Oneonta Mohawk trolley line called Otsego Park was formerly located in the eastern part of Laurens. Cotton mills once were an industry in Laurens, powered by the water of Gilbert Lake.

Otego Creek flows southward through the eastern part of Laurens.

A sulfur spring is located about a mile north of Laurens village.

There were 965 households out of which 32.1% had children under the age of 18 living with them, 55.5% were married couples living together, 11.5% had a female householder with no husband present, and 28.2% were non-families. 21.9% of all households were made up of individuals and 7.6% had someone living alone who was 65 years of age or older. The average household size was 2.49 and the average family size was 2.88.

Communities and locations in Laurens

All content from Kiddle encyclopedia articles (including the article images and facts) can be freely used under Attribution-ShareAlike license, unless stated otherwise. Cite this article:
Laurens (town), New York Facts for Kids. Kiddle Encyclopedia.