Leonardo Sandri (born 18 November 1943) is an Argentine Cardinal of the Catholic Church. He has been the Prefect of the Congregation for the Oriental Churches since June 2007 and a cardinal since November of that year. He served in the diplomatic service of the Holy See from 1974 to 1991, in several overseas assignments including as permanent observer of the Holy See before the Organization of American States from 1989 to 1991, and in Rome as Substitute for General Affairs in the Secretariat of State from 1999 to 2007. On 24 January 2020, Pope Francis approved his election as Vice Dean of the College of Cardinals.

Sandri was born in Buenos Aires to Antonio Enrico Sandri and Nella Righi, who had emigrated to Argentina from Ala, a village in Trentino in Italy. He studied humanities, philosophy and theology at the Metropolitan Seminary of Buenos Aires, and earned a Licentiate in Theology from the Pontifical Catholic University of Argentina. On 2 December 1967 he was ordained to the priesthood by Archbishop Juan Carlos Aramburu and became his secretary.

He also served as curate of Nuestra Señora del Carmen in Villa Urquiza until 1970. He then studied at the Pontifical Gregorian University, where he obtained a doctorate in canon law, and the Pontifical Latin American College. In 1971, he entered the Pontifical Ecclesiastical Academy, which trains papal diplomats.

In 1974, Sandri became an official of the Apostolic Nunciature in Madagascar and Mauritius, which also serves as the Apostolic Delegation in the islands of Comoros and Réunion in the Indian Ocean. He then served in the Vatican Secretariat of State, as secretary of the Substitute for General Affairs, including future cardinals Eduardo Martinez Somalo and Edward Cassidy from 1977 to 1989; and in the Apostolic Nunciature in the United States as permanent observer of the Holy See before the Organization of American States, from 1989 to 1991.

He became regent of the Prefecture of the Pontifical Household on 22 August 1991 and assessor of the Section for General Affairs in the Secretariat of State on 2 April 1992.

On 22 July 1997, Sandri was appointed Apostolic Nuncio to Venezuela and Titular Archbishop of Aemona by Pope John Paul II. He received his episcopal consecration on the following 11 October from Cardinal Angelo Sodano, with Cardinal Aramburu and Archbishop Giovanni Battista Re serving as co-consecrators, at St. Peter's Basilica. He selected as his episcopal motto: "Ille Fidelis", meaning, "He (Christ) remains faithful" (2 Timothy 2:13). He was the first Argentinian to hold the title of Apostolic Nuncio. After two years in Venezuela, he was named Apostolic Nuncio to Mexico on 1 March 2000. During his brief tenure there he was tasked with restraining the Mexican bishops from intervening in political affairs. 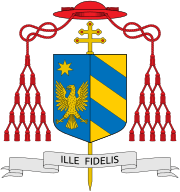 Coat of arms of Cardinal Sandri

On 16 September 2000, he was named Substitute for General Affairs, a key position within the Roman Curia, serving essentially as the chief of staff of the Secretariat of State.

As Pope John Paul's health declined, Sandri would read aloud the texts that the Pope could not deliver himself. On the evening of 2 April 2005 he announced the Pope's death from Saint Peter's Square, saying "We all feel like orphans this evening."

Congregation for the Oriental Churches

On 9 June 2007, Sandri was appointed Prefect of the Congregation for the Oriental Churches by Pope Benedict XVI. Succeeding Ignatius I Daoud, he heads the curial congregation that handles matters regarding the Eastern Catholic Churches and is the ex officio Grand Chancellor of the Pontifical Oriental Institute. Pope Francis confirmed that appointment on 19 February 2014.

Sandri visited the Holy Land in February 2008. In April 2009, he lamented the emigration of Christians from that region: "This lack of peace makes Christians emigrate and leave their land behind. So we're left with a purely geological, physical presence of Jesus, and not with the presence of those that grew with him and lived his faith, and that continue to follow him today like disciples of his very homeland."In 2014 he called for an end to the forced removal of Christians from Iraq and Syria, saying that more than 100,000 Christians had left their homes in Iraq and "now wander to the city of Erbil in impossible conditions".

One analysis of the delay in the canonization process for John Paul II pointed to, among other things, Sandri's apparent reluctance to testify in the effort.

In November 2014 the Vatican lifted its 1929 ban on the ordination of married men to the priesthood by Eastern Catholic churches outside their traditional territories, including in the United States, Canada and Australia. Sandri signed the decree on 14 June 2014.

Benedict XVI created him Cardinal-Deacon of San Carlo ai Catinari in the consistory of 24 November 2007. He delivered the message of thanksgiving to the Pope on behalf of the new cardinals on that occasion.

In April 2008, Sandri said that although the regime of Saddam Hussein was dictatorial, it is undeniable that Iraqi clergy and laity felt more secure under his regime and that their liturgical life went on undisturbed. 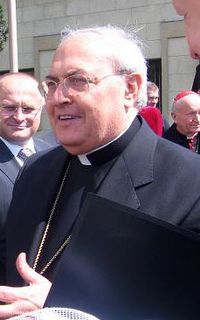 He was mentioned in the press as papabile, a possible candidate for election to the papacy at the time of the resignation of Pope Benedict XVI in 2013.

Sandri, as Prefect of the Congregation for the Oriental Churches, was named by Pope Benedict XVI as one of four co-presidents of the Special Synod of Bishops for the Middle East held at the Vatican in October 2010.

He is eligible to participate in a papal conclave until he reaches the age of 80 on 18 November 2023. He speaks English, French, German, Italian and Spanish.

In June 2005 Archbishop Sandri was awarded Knight Grand Cross of the Order of Merit of the Italian Republic.

He opted for the order of Cardinal Priests on 19 May 2018. Pope Francis raised him to the rank of Cardinal Bishop effective 28 June 2018. On 24 January 2020, Pope Francis approved his election as Vice Dean of the College of Cardinals by the nine Latin-rite cardinal-bishops. With that title, as the highest-ranking cardinal eligible to participate in a conclave, he would preside over any conclave held before his 80th birthday.

All content from Kiddle encyclopedia articles (including the article images and facts) can be freely used under Attribution-ShareAlike license, unless stated otherwise. Cite this article:
Leonardo Sandri Facts for Kids. Kiddle Encyclopedia.