Li He facts for kids

Kids Encyclopedia Facts
In this Chinese name, the family name is Li.

He was prevented from taking the imperial examination due to a naming taboo. He died very young, and was noted for his sickly appearance.

He was a diligent poet, going out on journeys during the day and, when a line of poetry came to him, jotting it down, and completing the poems when he arrived home in the evening. His poems famously explored ghostly, supernatural and fantastic themes.

His popularity and place in the Chinese literary canon has fluctuated throughout the centuries. His idiosyncratic style of poetry was frequently imitated in China until the Qing era. During this era, the popularity of his poetry suffered from a change in literary tastes, with his works notably being excluded from the influential Three Hundred Tang Poems, but there was a revival of interest in him in the twentieth century. He was among the Tang poets most admired by Mao Zedong.

Chapter 137 of the Old Book of Tang and chapter 203 of the New Book of Tang each give a brief outline of the biography of Li He.

Li Shangyin, a poet of the following generation, also wrote a Short Biography of Li He. Du Mu, in 831, wrote a preface to Li's collected poems (Chinese: 李賀集敘; pinyin: Li He ji xu), which is more removed than the affectionate account written by Li Shangyin, but provides very little biographical information and is more focused on Li's appeal as a poet. Both the official histories are heavily dependent on these earlier records, particularly on Li Shangyin's account.

His family were of distant royal descent (from the Li family who were the ruling dynastic family of the Tang Dynasty), but his branch's fortunes had declined early on, and by Li He's time they were of low rank. Both the Tang state histories refer to him as a "descendant of Zheng Wang", but there is dispute as to the identity of Zheng Wang. The theory with more support among scholars is that it refers to Zheng Xiao Wang Liang (zh), an uncle of Li Yuan, the first Tang emperor; another theory is that it refers to the thirteenth son of Li Yuan, Zheng Wang Yuan Yi (zh).

He was born in 790 or 791. It seems likely that he was born in the year of the Horse, as some twenty-three of his surviving poems use the horse as a symbol for the poet.

He was a native of Fuchang County (west of modern-day Yiyang County, Henan Province).

He started composing poetry at the age of 7, and by around 15 he was being compared to the yuefu master Li Yi.

When Li was 20, he attempted to take the Imperial Examination, but was forbidden from doing so because of a naming taboo: the first character (晉 jin) of his father's given name (晉肅 Jinsu) was a homonym of the first character (進) of Jinshi (進士), the name of the degree that would have been conferred on him had he passed. Ueki et al. (1999) speculate that this was a pretext devised by rivals, who were jealous of his poetic skill, to prevent him from sitting the examination.

Han Yu, who admired his poetry, wrote Hui Bian (諱弁) to encourage him to take the exam, but Li was ultimately unsuccessful. He served only three years, in the low-ranking office of Fenglilang (奉禮郎) before returning to his hometown.

He is described as having a very sickly appearance: he was supposedly very thin, had a unibrow, and let his fingernails grow long. Li He died a low-ranking and poor official in 816 or 817, at the age of 26 or 27. The Short Biography of Li He reports that at the hour of his death he was visited by a figure in scarlet who told him that Shangdi had summoned him to heaven to write poetry.

His courtesy name was Changji, and he is also known by a combination of his surname and courtesy name, Li Changji.

He was also known as Guicai (鬼才 "devilish talent") by contrast of his morbid poetic style to Li Bai's Tiancai (天才 "heavenly talent") and Bai Juyi's Rencai (人才 "humanly talent"). This title was given him by the Song scholar Qian Yi (zh) in his work Nanbu Xinshu (zh). 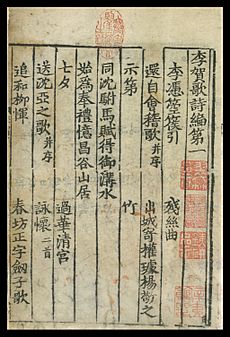 Collected Songs and Verses of Li He

In literary history, Li is generally considered a poet of the so-called Middle Tang period, which spanned the late-eighth and early-ninth centuries. Among his poetic influences were his older contemporary Meng Jiao and the aforementioned Han Yu. Other sources that have been identified as influencing Li's poetry were the shamanistic elements of the Chu Ci and the idiosyncratic poetry of Li Bai.

The Short Biography of Li He describes him as a diligent poet, who carried an old brocade bag around with him, and when a line of poetry came to him he would jot it down and put it in this bag. After getting home, he would arrange these lines into a poem.

His poetry is unique, filled with fantastic and unusual imagery, which is where he gets his nickname "Guicai" (see above). Virtually none of his surviving poems are in regulated verse form, and his poems make frequent use of inauspicious words such as "aging" (Chinese: 老; pinyin: lǎo) and "death" (Chinese: 死; pinyin: sǐ). In poems like "Tianshang yao" and "Meng tian", he wrote evocatively of the worlds of gods and Buddhas.

He also gave eerie descriptions of the world of ghosts in his poems "Qiu lai" and "Shen xian qu". The spiritual symbolism Li employed in the latter poem has been called "nearly impenetrable".

"Shen xian qu" was the name of a popular folk song going back at least as far as the Six Dynasties period, and Li's poem borrows the name of this song. The song originated in the Nanjing area, as a ritual song meant to be played at religious ceremonies to invite the favour of the gods. Li's poem describes the supernatural world but this is not the case with the original folk song.

He frequently combined colour and feeling imagery in his poetry, as can be seen in his poems "Tianshang yao" (see above) and "Qin wang yin jiu".

His poetic style was dubbed Changji-ti (simplified Chinese: 长吉体; traditional Chinese: 長吉體; pinyin: cháng jí tǐ) by later critics, after his courtesy name. The Song commentator Yan Yu listed this as one of the individual author-based styles of poetry that was frequently imitated.

All content from Kiddle encyclopedia articles (including the article images and facts) can be freely used under Attribution-ShareAlike license, unless stated otherwise. Cite this article:
Li He Facts for Kids. Kiddle Encyclopedia.