Lilly Wood and the Prick facts for kids

Lilly Wood and the Prick (also known as Lilly Wood and LILLYWOOD) is a French folk pop duo composed of Nili Hadida and Benjamin Cotto. Although the duo is French, Nili was born in Israel. They are best known for their single "Prayer in C", which was remixed and released as a single in 2014 by German DJ and producer Robin Schulz; the song has topped the charts in Austria, Belgium, France, Germany, Israel, Lebanon, Italy, the Netherlands, Spain, Switzerland and the United Kingdom. 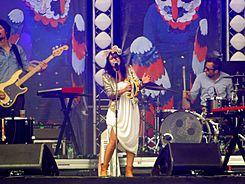 The duo was formed in 2006 when they met in a Parisian café and decided to collaborate on writing songs together.

After collaborating on a number of songs, in 2008 they made a cover of "L.E.S. Artistes" from Santogold. They also met guitarist Pierre Guimard who heard their songs on Myspace and offered to work with them and opened his studio for production of their work. 2008 saw release of their track on a compilation entitled Folk & Proud followed, in 2009, by the EP of the duo Lilly Who and the What? referring to the stage name of the duo. It was released on Choke Industry independent label founded by Pierre Guimard and by Matthieu Tessier, the duo's manager. After 2009, they signed with another independent label called Cinq7.

Their first studio album Invincible Friends was released on 31 May 2010. On 9 February 2011, they were nominated for "revelation of the public" award for the Victoires de la Musique. On the official ceremony held on 1 March and broadcast on France 2, TV5 Monde and France Inter they won against competition in the same category from Ben l'Oncle Soul, Camélia Jordana, Zaz, Féfé, Guillaume Grand, Florent Marchet and Okou They also engaged on a tour including one at Olympia Paris on 1 June 2011. Their follow up album was The Fight released on 5 November 2012. In 2013, they came to the cinema with a movie called Lilly Wood and The Prick au Trianon directed by Benjamin Lemaire.

In June 2014 they released the single for "Prayer in C", a track originally included in their 2010 album, Invincible Friends. German DJ and producer Robin Schulz remixed the song bringing with it success across Europe. The success of the song helped propel the duo into their highest charting solo song in France in 2015 with a song called "I Love You" peaking at number 65. They released their debut album "Shadows" along with two other singles, "Box Of Noise" and a studio session of "Kokomo" in 2016.

All content from Kiddle encyclopedia articles (including the article images and facts) can be freely used under Attribution-ShareAlike license, unless stated otherwise. Cite this article:
Lilly Wood and the Prick Facts for Kids. Kiddle Encyclopedia.