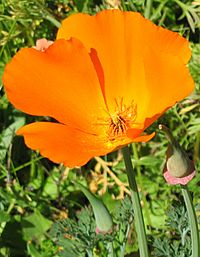 The native plants of the San Francisco Bay Area are not always typical of other regions of California, and some species are endemic. This list covers the flowers of the Bay Area one is most likely to see within its nine counties. It starts with flowers that are (a) common and/or (b) already have an article in Wikipedia. Flowering shrubs and trees are only included if their flowers are visually significant.

The list is divided into forbs (herbs), shrubs, and trees.

Garden escapes are introduced species, plants that have established in the area - via their seeds, underground runners, or by exuberant growth - beyond the limits of gardens where planted. Some may be reproducing in the wild as invasive species and noxious weeds. Because of the large population of the Bay Area and its variety of garden styles, many plant species may be encountered as garden escapes.

Among those seen are:

All content from Kiddle encyclopedia articles (including the article images and facts) can be freely used under Attribution-ShareAlike license, unless stated otherwise. Cite this article:
List of San Francisco Bay Area wildflowers Facts for Kids. Kiddle Encyclopedia.