List of Spanish governors of New Mexico facts for kids 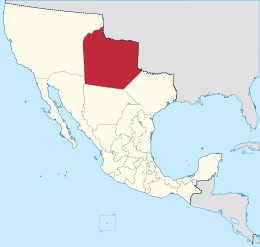 Map of the province of Nuevo México in 1824

Spanish Governors of New Mexico were the political chief executives of the province of Santa Fe de Nuevo México (New Mexico) between 1598, when it was discovered during an expedition by Juan de Oñate, and 1822, following Mexico's declaration of independence. The territory was subsequently occupied by the United States beginning in 1846, and became a state in 1912.

In 1598, Juan de Oñate pioneered 'The Royal Road of the Interior Land' or El Camino Real de Tierra Adentro between Mexico City and the 12CE Tewa village of 'Ohkay Owingeh' or San Juan Pueblo, founding the Nuevo México Province under the authority of Philip II. He also founded the settlement (a Spanish pueblo) of San Juan on the Rio Grande near the Native American Pueblo. In 1610, Pedro de Peralta, then governor, established the settlement of Santa Fe in the region of the Sangre de Cristo Mountains on the Rio Grande. Missions were established for conversions and agricultural industry under the authority of the governor. The territory's Puebloan peoples resented the Spaniards denigration and prohibition of their traditional religion, and their encomienda system's forced labor. In 1680, the Pueblo Revolt occurred, and a final resolution included additional protections from Spanish efforts to eradicate their culture and religion, the issuing of substantial communal land grants to each Pueblo, and a public defender of their rights and for their legal cases in Spanish courts.

In January 1822, the last Governor under the Spanish regime, Facundo Melgares, lost the title of governor and was now called géfe político (political chief) and géfe militar (military chief). Subsequently, Melgares became the first Mexican Governor of New Mexico, serving until July 5, 1822 when he was succeeded by Francisco Xavier Chavez, though he would hold office for just five months.

All content from Kiddle encyclopedia articles (including the article images and facts) can be freely used under Attribution-ShareAlike license, unless stated otherwise. Cite this article:
List of Spanish governors of New Mexico Facts for Kids. Kiddle Encyclopedia.