Sparta was an important Greek city-state in the Peloponnesus. It was unusual in that it had a diarchial system, with two kings ruling at the same time. The kings were called Arkhagêtai. They were hereditary rulers, and came from two separate dynasties. According to tradition, the two lines, the Agiads and Eurypontids, were descended from the twins Eurysthenes and Procles. These twins were said to be the descendants of Heracles, who conquered Sparta two generations after the Trojan War. The dynasties were named after the twins' grandsons, the kings Agis I and Eurypon. The Agiad line was regarded as being senior to the Eurypontid line.

Although there are lists of earlier Kings of Sparta, there is little evidence to show that any kings existed before the middle of the 6th century BC. 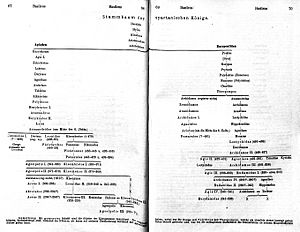 Genealogical Tree of the Kings of Sparta

Many kings of Sparta are described in Greek mythology.

After Cleomenes III was defeated by Antigonus III Doson of Macedon and the Achaean League in the Battle of Sellasia, the Spartan kingship began to fail. Sparta was a republic from 221 to 219 BC. The dual monarchy was restored in 219 BC.

Nabis, who served as regent for Pelops, deposed Pelops and took the throne for himself. He claimed to be descended from the Eurypontid king Demaratus. He ruled from 206–192 BC. Laconicus was the last known king of Sparta. He took the throne in 192 BC. The Achaean League took control of Sparta in 192 BC.

All content from Kiddle encyclopedia articles (including the article images and facts) can be freely used under Attribution-ShareAlike license, unless stated otherwise. Cite this article:
List of kings of Sparta Facts for Kids. Kiddle Encyclopedia.