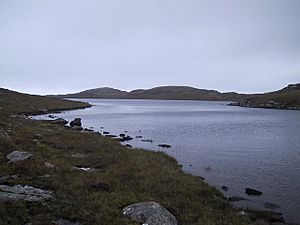 Loch Langavat (Scottish Gaelic: Langabhat) is the name of several freshwater lochs in the Outer Hebrides of Scotland. The name is a Gaelic rendition of Old Norse lang "long" and vatn, meaning "lake".

There is another Loch Langabhat on Benbecula at , which is over 4 kilometres (2.5 mi) long.

According to Sinclair (1890), John Macaulay, known as Iain Ruadh MacDhughaill, "was celebrated as a hunter. He was drowned in Loch Langabhat whilst swimming to an Island in the middle of that lake, an t-Eilaln Dubh. A large stone marks the spot on which his body was laid after it was taken out of the water. His bereaved mother used to visit this spot on almost every Wednesday of the year. He was born about the year 1600." It is not clear which of the Loch Langavats this incident refers to.

All content from Kiddle encyclopedia articles (including the article images and facts) can be freely used under Attribution-ShareAlike license, unless stated otherwise. Cite this article:
Loch Langavat Facts for Kids. Kiddle Encyclopedia.