Carloway (Scottish Gaelic: Càrlabhagh, IPA:[ˈkʰaːɾɫ̪ə.ɤː]) is a crofting township and a district on the west coast of the Isle of Lewis, in the Outer Hebrides, Scotland. The district has a population of around 500. Carloway township is within the parish of Uig, and is situated on the A858.

Carloway is very attractive for tourism, with many historic sites to see, such as the Garenin Blackhouse Village and the Iron Age Doune Carloway Broch. There is also a standing stone called "Clach an Tursa" in Upper Carloway.

The Carloway Bridge is said to be one of Scotland's oldest flyovers, being built in the mid-19th century. The bridge crosses the Carloway River and the Pentland Road, which leads from Carloway Pier and Harbour to Stornoway.

The district of Carloway (after the village of that name) which hitherto had fallen partly within the parishes of Lochs and Uig, became a separate civil registration district in 1859.

The district is divided into eight townships: Knock Carloway, Park Carloway, Doune Carloway, Upper Carloway, Garenin, Borrowston, Kirivick and Dalmore. The Estate starts at the cattle grid between Garynahine and Callanish and ends at the Bragar cattle grid, just leaving Shawbost towards Bragar.

Public services include a primary school, a youth hostel, a police station, hotels, restaurants, a newly renovated Harris Tweed mill, a pier, a surgery and day centre, a museum, a community centre, two churches (The Free Church of Scotland and The Church of Scotland), a football pitch, a war memorial and a historical society. Plans for a petrol station and convenience store have been proposed. 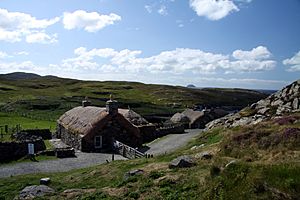 Black houses, a museum in the village

The district is known throughout the Western Isles for its Agricultural Show and Highland Games, held annually on the first Wednesday of August at the Show Ground, behind Carloway School in the centre. It is the longest running agricultural show and Highland Games on the island, first held in 1911 and officially the oldest since Beinn-na-Dròbh agricultural show stopped in Stornoway. It is locally known as the island's "Premiere Show", and 2,500 people attending the 58th Agricultural Show in 2011, more than the previous year's attendance.

Three routes connect Carloway with the main town of Stornoway: 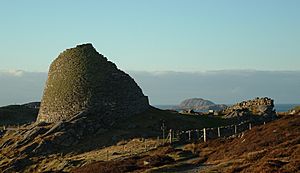 The district has two churches, both of which are located near the Carloway Bridge in the Knock Carloway township. The Free Church of Scotland was built in 1884 and has a congregation of up to 100 people. Services are conducted in both English and Scottish Gaelic. The Church of Scotland is next door to the Free Church and was built in 1908. It has a congregation with just over 50 people, with services conducted in English.

Football is by far the most favoured sport in the area. Carloway F.C. was founded in 1933 and first constituted in 1946 after the Second World War, playing their games on turf at Altan Feirigro in Garenin, before relocating to land near Cnoc a' Choilich in Upper Carloway. The club's catchment area covers the Parish of Uig area between Dalmore and Breanish. The club won its first trophy in 1952 after beating league champions Point 5–1 to win the Stornoway Cup. Between 1955 and 1957, Carloway won several more trophies: a 5–1 victory against Back to win the D'Oyle Carte Cup and a 4–1 victory against Point to win the Tormod Mor Tankard, both in 1956. The following year they defeated Stornoway United to win the Stornoway Cup for the second time. During that period it was rare to see a final without the involvement of the club, with the Eilean Fhraoich Cup Final seeing Carloway three years in a row, despite the club failing to win. Since this successful period in the 1950s, it took the club until 2012 to win their next trophy, defeating Back 7–6 on penalties to lift the Co-operative Cup after a 1–1 draw. In the same week, the club secured the double by winning the Lewis Cup, again on penalties, after drawing 3–3 against rivals West Side. In 2013, Carloway recently won the Acres Boys Club Cup after defeating Back 6–0 in the final, as well as the Jock Stein Cup after defeating rivals West Side 3–0 in the final. Carloway also won their first League title in their eighty-year history. The club boasts the largest support in the Western Isles and indeed one of the best playing surfaces in the Highlands and Islands, which was opened in 1991 with a friendly against Rangers reserves. The match attracted around 1100 spectators to the newly built pitch, which had been renovated twice (1949–51 and 1991) since its construction in 1935. Two players who have played for Carloway went on to play football at professional level: Ronnie MacKinnon, who played for Rangers and Scotland, and his brother Donnie, who played for Partick Thistle.

Notable Carlowegians and people connected with the district

All content from Kiddle encyclopedia articles (including the article images and facts) can be freely used under Attribution-ShareAlike license, unless stated otherwise. Cite this article:
Carloway Facts for Kids. Kiddle Encyclopedia.