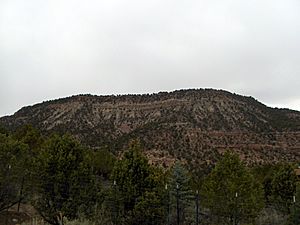 According to the United States Census Bureau, the CDP has a total area of 5.5 square miles (14 km2), all of it land. Loghill Village borders Ridgway State Park and Eldredge, though there is no direct road access between the two. Via road, Loghill is nearest to the town of Ridgway which can be seen from its position on the mesa.

Loghill is primarily covered in large Ponderosa Pine trees, piñons and junipers. Wildlife is abundant on the Mesa with a fairly large population of Mule Deer, Elk, Bobcats, Lynxes, Black Bears (of various colors), wild turkeys and an occasional siting of mountain lions. Almost 1,000 feet higher than Ridgway, the types and sizes of flora vary greatly. For example, Aspen trees are seen here and there on the mesa, as opposed to the lower Ridgway valley where they are scarce. Aspens can be seen more abundantly in the foothills and mid mountain areas of the San Juan Mountains and Cimarrons.

There were 135 households out of which 22.2% had children under the age of 18 living with them, 80.7% were married couples living together, 1.5% had a female householder with no husband present, and 15.6% were non-families. 11.9% of all households were made up of individuals and 4.4% had someone living alone who was 65 years of age or older. The average household size was 2.30 and the average family size was 2.47.

Loghill Village is divided into two main communities by a shallow gorge, a common greenbelt, running southwest to northeast.

Loghill Village is primarily a residential community. There is some tourism at the golf course, the former Fairway Pines Golf Course which is now known as the Divide Ranch and Club Golf Course. There is a bar and grill restaurant, open seasonally, at the Divide golf course club house. The Loghill Village Park and Recreation Department maintains a matrix of trails on the mesa with a combined length of more than six miles. The Escarpment trail has several lookout points overlooking the town of Ridgway and Pleasant Valley with views of the Sneffels Range and Cimmaron Range. No wheeled traffic is allowed on the hiking trails.

All content from Kiddle encyclopedia articles (including the article images and facts) can be freely used under Attribution-ShareAlike license, unless stated otherwise. Cite this article:
Loghill Village, Colorado Facts for Kids. Kiddle Encyclopedia.